Moon Theatre Co.’s newest entertainment venture will be a virtual Christmas variety show on YouTube in the first online event for the Berthoud-based theater company.

“This is our first try at it,” said Pam Strahan, founding board member of Moon Theatre Co., founded in 2009. “We’re still thinking of other ideas. We’ll see how this one works.”

The “Virtual Christmas Variety Show,” which releases Dec. 15 on Moon Theatre Berthoud’s YouTube page, will feature a variety of performances compiled like a Zoom call that will include a comedian, musicians and children singing. There also will be readings from a few Christmas stories and cuttings from “It’s a Wonderful Life” and “The Gift of the Magi,” plus an appearance from Santa and Mrs. Claus, who will be reading “The Night Before Christmas.”

The variety show is a way for the company to give back to the Berthoud community, Strahan said. 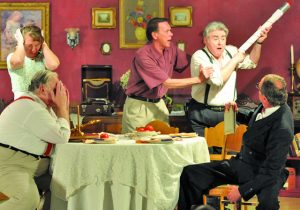 Courtesy Photo – Cast photo from Moon Theatre’s production of “You Can’t Take it With You.”

“Berthoud has been wonderful to our company,” Strahan said.

Moon Theater Co. plans to return to Berthoud after its last show at the Rialto Theater in Loveland, where it performs twice a year. The company’s last show, a comedy called “Moonlight and Magnolias,” will be in March 2021, originally planned for March 2020 but postponed due to the COVID-19 pandemic. The cast of four started rehearsing in October 2019 and has been practicing since through Zoom meetings.

“This cast has stuck together and committed to it,” Strahan said. “It’s a really good show with very strong actors in it.”

The theater company originally performed at First United Methodist Church in Berthoud until its move to the Rialto in 2013. The company does not have a home base in Berthoud but will perform at various outlets, including churches that have a stage setup.

“We want to come back home, because that’s where we started,” Strahan said. “The Rialto is a nice, beautiful, art deco theater that seats 500. Our plays are smaller and more intimate. We want to get to a smaller venue and bring theater back to Berthoud.”

Moon Theatre Co. originally formed because Berthoud lacked a theater company following the closing of Wayside Inn. The seven founding members based the name for the company on the former turn-of-the-century movie theater Moon Theater on Massachusetts Avenue, but used the British spelling of “theatre.”

The actors, directors and writers for the company work on a voluntary basis, auditioning show to show, and the company is all-inclusive bringing together a cast of different backgrounds and experience levels. The company’s shows include comedies, dramas, murder mysteries, dinner theaters and musicals, as well as fundraisers, readers theaters and first-run performances, including “Beets,” by Loveland playwright Rick Padden, premiered in 2009 and presented again in 2017.

“They pretty much exemplify and represent all I would hope for in community theater,” said Padden, an actor with Moon Theatre Co., who performed in seven shows, wrote five shows and served as a board member for three years. “It’s because of them I can stake my claim as a playwright. Their direction and refinement and support of my works has led to the kind of stage successes I could only dream would happen.”

Padden describes the company as “a group of theatrically experienced people passionately devoted to entertainment” that also is fearless.

“Nothing is too large for them or too challenging despite their modest budget,” Padden said. “They’re wonderful to work with, and they have the sincere desire to make things fun and impactful for everyone involved in their projects.”

Moon Theatre Co.’s next show will be a murder mystery and presented in October 2021 in Berthoud, though the play and the venue have not yet been identified. The company also may do an in-person Christmas variety show and a best of Moon Theatre Co. as another YouTube presentation.

“We don’t have our own venue, which is good and bad. There’s no overhead, but we have to move around,” Strahan said. “I’m thrilled we’re still here and hanging in there and we’re not going away.”