At last week’s Berthoud Fire Protection District Board Meeting, held February 16, 2021, in Berthoud Fire’s Training Room, several retired Berthoud Fire volunteers who represent the non-profit organization The Caretakers of Tradition, presented the firefighters will a memorial bell. Recently, “Caretakers” received a memorial fund from the Van Thuyne family and decided to utilize the donation to honor the Berthoud firefighters with a symbolic memorial bell. The bell was received in memory of Wuanita Van Thuyne and presented by her son Mark Van Thuyne along with Pension Board President, Paul Rimsky. 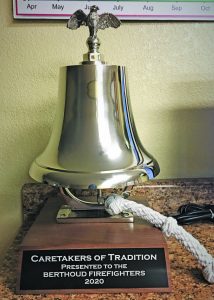 The bell that was presented to Berthoud firefighters was due to memorial funds received in honor of Wuanita Van Thuyne. “The bell is a replica of the bell that for many years was found on both horse-drawn firefighting steam pumpers as well as motor driven fire engines from the 1920’s to today. The tradition of ringing a bell at a firefighter’s funeral stretches back more than 200 years. Generations ago, a bell would ring at the beginning and end of a shift and to alert firefighters of an emergency. After the call, when the emergency was over, the bell would ring again. At the funeral, the ringing of the bell is symbolic, representing the fallen firefighters final alarm, generally three rings of the bell, three times,” according to Ward. 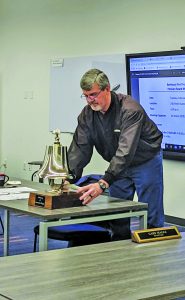 Waunita’s son Mark Van Thuyne detailed a history of their family’s long-standing connection to the Berthoud community and fire service: “Waunita came to Berthoud at the age of 17, just recently married to Arthur Van Thuyne. She was a farmer’s wife and homemaker all her life, which entails a lot more than most people realize. Art and Waunita farmed in the Berthoud area for many years, they raised two children, Mark, an accomplished farmer himself, and Berthoud volunteer firefighter and later in life a successful business owner. Waunita gave the first half of her life to the Presbyterian Church as a Sunday school teacher for over 20 years. Then one day she said, “I love the people at the United Methodist Church a few blocks north as much as the folks at the Presbyterian Church, so I think I’ll give the second half of my life to them”. And she did. She was active in all church groups, and the P.E.O. Chapter of Berthoud. In the last 25 years of her life health issues brought the Berthoud Firefighters and EMTs to her front door so many times they became first-name friends. She never locked her door so that if she needed “the guys” to come in and help, they would not have to damage the door. Waunita always lived within hearing distance of the old fire siren long before modern technology. When it would sound, she often imagined the tenseness in their chests, wondering what they were going to face and return safely. She genuinely loved the members of the Berthoud Fire Department and thought the world of all of them, many of whom she knew of over 75 years. She thought of them as heroes. Additionally, Waunita’s next-door neighbor was retired Berthoud Fire Chief John Beck, adding to the strong tie to the community first responders. These personal friendships with many of the Berthoud Firefighters resulted in the memorial funds upon her death.”