What were you doing at age 9? Odds are, you weren’t a business owner. Meet Brody Davis-Coffield, a 9-year-old third-grader and owner of Brody’s Fluffy Butt Hut.

Like many children, Brody started by selling lemonade, but he didn’t just have one stand, he had three. Born with the salesman gene, Jen Davis, his mother, doesn’t know where it came from, it just is.

“When he was little, he tried to sell rocks,” laughed Jen. More recently, he gave his business card to Santa Claus.

One year ago, in March, Brody started a website selling eggs, www.brodysfluffybutthut.com. He bought six chickens with a loan from his parents but quickly realized that selling eggs was not going to produce much profit. 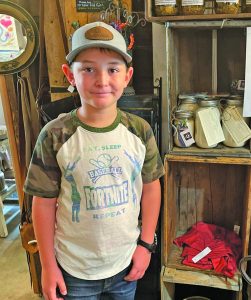 Courtesy photo – Brody Davis-Coffield showcasing some of his products at The Rancher’s Wife shop in Berthoud.

Back in May, to increase profit margins, he added candles to his repertoire.

“Everyone loves candles. I come out with different scents every season,” he said.

Brody makes the candles in scents such as birthday cake, cinnamon, lavender-vanilla and more. His personal favorite is Salty Chick, a sea salt orchid scented candle. He starts with the wax and he explains that every pound of wax makes three 8 ounce candles, which he sells for $8 each. He will soon be adding a 16-ounce candle to his offerings.

His candles are available through his website and at The Rancher’s Wife in Berthoud feed and grain. Overall, the best-selling candle is the Chill Chicken, which is lavender scented.

However, Brody is an entrepreneur, selling eggs and candles was alright, but inspired by his cousin’s soap business, he is now adding soap to the items for sale on his website.

“It smells so bad at the beginning of making it,” said Brody, who is now making candles and soap.

When finished, however, the soaps smell delightful. Right now, Brody has made Rainwater and Lavender soaps. When not busy taking care of his chickens or making products, Brody plays baseball and attends Berthoud Elementary School.

Brody already plans to add employees and has someone in mind, but first, he has to work on business growth, which involves paying his parents back for loans on things like chicken feed, etc.

“My mom keeps track of all my emails and things like that,” said Brody.

“I also do the businesses’ taxes,” said Jen, who considers herself Brody’s Fluffy Butt Hutt’s first employee, although she isn’t paid.

Brody plans to continue selling items through his shop, making the inventory more and more diverse. Right now, he markets through word of mouth and it appears to be working. The fact that Brody makes an excellent-looking and smelling candle doesn’t hurt either.

This summer, Brody’s Fluffy Butt Hut products will be available at the Berthoud Farmers Market, at The Rancher’s Wife and through his website, www.brodysfluffybutthut.com.