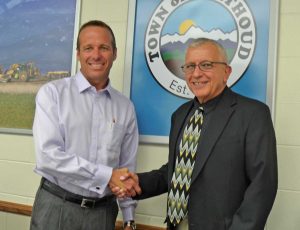 Mayor-elect Steve Mulvihill was sworn in at the start of Tuesday’s special meeting of the Berthoud Board of Trustees. Following the brief swearing ceremony, Mulvihill took the seat which had been filled since early April by Interim Mayor David Gregg.

In opening comments Mulvihill thanked all who took part in the election, particularly those who voted for him. He indicated the election sent a clear message how the citizens of the town wished town government to proceed for the next year. Mulvihill’s term as mayor ends April 2018.

He stated his belief that all of his fellow board members had an honest and sincere desire for the town to retain its charm while at the same time growing in a responsible way. He also requested the members of the board hold their comments to three minutes and that they treat each other with respect. He added it was his duty to do what was best for the majority of the town’s residents.

During the Citizen Participation portion of the meeting, six residents stood at the podium to register their displeasure with the mosquito fogging which was conducted Monday night. The major complaint was the perceived ineffective communication to the community concerning the fogging which would be taking place. There were also complaints of the town relinquishing control of whether or not to fog and to control the mosquito population with larvicide rather than fogging the adult mosquitos.

Following public input the trustees were given the opportunity to respond to the issues raised. Responses from the trustees ranged from communicating a spraying will take place a week in advance, to stating either they or a friend or relative contracted West Nile Virus and never fully recovered. It was noted by Trustee Chris Buckridge the town is already using larvicide and has taken steps to remove places which mosquitos would find as good places to breed, the Second Street tire pile being one example.

Town Administrator Mike Hart stated Colorado Mosquito Control (CMC) maintains the mosquito traps in town, but the testing of the mosquitos found in the traps is conducted by Colorado State University (CSU). He also noted CMC does not determine when to fog. The directive to fog came from the Director of Public Health for Larimer County.

“I don’t know if the town can lose control of something we never had control of to begin with,” stated Hart, “When that person says it is time to spray, and all of the surrounding communities are spraying due to the public health risk, I’m not sure we have a choice.”

“However, in this situation I want you to please understand, not only was this decided a year ago and everyone reacted based on the decision made at that time, but the decision was not taken lightly. Based on everyone’s input and the input from the board, it is totally reasonable the board will readdress this issue (at a future meeting),” stated Mulvihill.

The trustees unanimously approved a resolution designating the residence at 733 Fifth St., (also known as the Culp House) as a local historic landmark.

In other board news:

– The board heard an updated presentation by Town Forester Josh Embrey concerning the Emerald Ash Borer.

– The board unanimously affirmed the choice of the mayor to retain Chris Buckridge as Mayor Pro Tem.