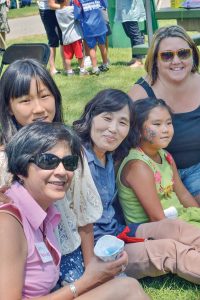 Adoptive mother Sarry Moscatel, adopted daughter Ella, Korean foster mother KeumSoon Yang, adopted daughter Ava, adoptive mother Leslie Seely. This was the first time that the foster mother has seen both Ella and Ava since they were infants in her care at the foster home in Korea. She had pure elation to see them doing well even though there was a language barrier, and the girls did not remember her, the moment was priceless for the families.
May Soricelli / The Surveyor

Berthoud Town Park was decorated with tents and festive booths for the annual Celebration Picnic hosted by Berthoud’s own Adoption for All Children (AAC) on Saturday, July 19. This year marked the organization’s 20th year assisting families with adoptions for children from both China and Korea. With over 400 members and guests in attendance from around the country the event was a success in bringing the extended adoptive families all together.

The adoption agency was founded in 1994 by local residents Larry and Jackie Bebo. The Bebos have been married 46 years and have had the delight of giving birth to two of their own children as well as adopting 28.

“It tugged at our heartstrings so hard we decided to adopt and then start the agency to help families experience what we had with adoption,” said Larry. “We really wanted to help stitch families together.”

Through this commemorative event the Bebo family was able to witness firsthand the legacy of families helped by them. They are now even seeing some of their adoptive children adopting their own children.

“Being here makes a man want to fall into a puddle and cry because of all the emotion.” said Larry.

One of the agency’s very first adoptees, who was adopted nearly 20 years ago at the age of 6 months, was in attendance.

“It is great to see all the old families again and see all the work we’ve done,” said Christie Lasko, who has been working with the organization since 2000. She herself was one of the Bebo’s adoptive daughters from Korea.

According to Marissa Bebo there are several adopted children who have gone to families here in Berthoud as well.

“We’re a smaller organization, but more family oriented, not a corporate agency; we remember all the kids that come through,” said Lasko.

Despite some recent changes to the regulations on adoption, Lasko said “Chinese and Korean adoptions are going strong.” Through this agency the children go through a waiting-child program which is a much quicker process than normal adoptions. 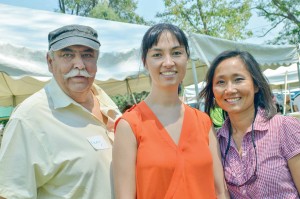 The honored guests at the celebration included AAC’s partners in international adoption from both Korea and China, Korean drum performances, Chinese dance and song, and Taekwondo display to add cultural entertainment to the festivity. The guests received generosity in the form of free Korean and Chinese lunch, and activities for the children including face painting, caricature drawings, Chinese paper cutting, and a bouncy castle.

Two very special Korean foster moms were in attendance. They are mothers who take care of the adoptive children during the process before they are adopted while in Korea. These foster mothers provide a nurturing and caring home for the children in transition. One of the women has had 38 children that she has taken care of and the other has had 37 over the last 15 years.

“These moms are uniting with the kids they helped at this event. For some of them it has been many years since they have seen each other last,” said Lasko.

Korean foster mom KeumSoon Yang was seen holding the hands of two adopted children that she remembered, now grown, with a glowing smile of joy on her face.

Sarry Moscatel of Lakewood recalls adopting her daughter Ella 11 years ago at the age of 4 months. “She was very young and chubby, we have great pictures of her,” Moscatel said.

Ella was one of the children who stayed in KeumSoon Yang’s care in Korea. When translated to English the foster mother said Ella was very attached to her and cried when they were separated. Moscatel remembers how the young baby cried so fiercely at the airport the day she arrived and how it took a long time for her to adjust. These are things you wouldn’t have known by looking at the pair now knitted together as loving mother and daughter. Moscatel and her husband also have a son they adopted 12 years ago as an infant.

“We were married later in life and couldn’t have children. There was a lot of struggle with domestic agencies because of our age and you have to be selected” said Moscatel. “We looked into several different options and found AAC was a lot more family focused and we did not have to be selected but instead put on a queue.” Moscatel says that the overall process was a shorter period of time than a pregnancy and was even more rapid with their second adoption.

These adoptive family events create a common bond and network where the families can share stories and anxieties. The agency attempts to do events every two months for adoptive families to create an environment to stay connected and have support from others. Because the agency is founded on its family oriented goals, they host a large picnic every year for the adoptive families, especially since they are spread out through all of the 50 states. After 20 years they have seen nearly 2,500 adoptions, many of which they have developed strong relationships with.