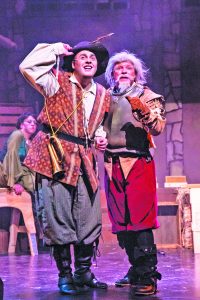 I’ll start with full disclosure – Man of La Mancha has never been my favorite musical. In the play the classic 17th century novel Don Quixote, which the show is based on, is retold through a character named Cervantes who is awaiting trial during the Spanish Inquisition making it a play-within-a-play. Not exactly light subject matter. However, this production by the Candlelight Dinner Playhouse opened my eyes to appreciate a tale that spans both comedy and tragedy and due to the overall excellence of the cast and production as a whole I thoroughly enjoyed a performance that was both entertaining, emotional and thought provoking.

A good production immerses you in the story. From the minute you sit down to a themed dinner, in this case a menu with a Spanish influence, until the end of the show you are ushered into the world you came to be a part of. For me if I forget I’m sitting in a theater watching a live performance there’s a pretty good chance all of the elements came together incredibly well. This was one of those shows.

Diving in to the details…

Taking a lead role is daunting; the weight of the show in many ways lies directly on your shoulders. Each of the leads are gifted performers who brought their characters fully to life.

The role of Cervantes who is telling the tale to his fellow prisoners also is required to portray Don Quixote the alter ego of a delusional old man named Alonso Quijana who also makes an appearance, three parts in one. David L. Wygant’s warm vocals alongside his acting skills made you want to sympathize and root for each of the well-defined iterations of his character. 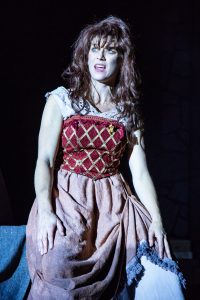 Aldonza, a serving wench and part-time prostitute is seen through the eyes of Don Quixote as a beautiful, innocent lady named Dulcinea. I might not be able to say enough about Heather McClain’s performance. I wasn’t expecting to get emotional but her voice, belting out in disgust It’s All the Same  to the moving What Does He Want of Me?  where she questions Don Quixotes unfamiliar kindness and affections toward her definitely moved me. McClain nails it. Her ability to convey the heart of a woman who has experienced great abuse and tragedy hardening herself to the world but still very much vulnerable on the inside was beautifully done.

Lightening the load for Don Quixote and the show over all, by toting his crumpled sword, the result of fighting windmills, Ethan Knowles portrayal of Cervantes’ manservant and Don Quixote’s squire Sancho Panza hit all the right notes.  The character brings comedic relief to balance things out with songs like “I Really Like Him” being his sole explanation for why he follows the old man around.

The supporting and featured performances were all strong and only further fleshed out a variety of characters brought to life in the tale. I don’t have the space to extol how gifted this cast truly is.

The set design and lighting are great and the use of the available space on the stage convincingly but subtly conveys different scenes. The moon in the courtyard, the hall of a seedy inn, a prison during the Spanish Inquisition all come to life in this thoughtful display of stone and smoky hearths.

What I appreciated most about the production is you leave the performance having actually connected to the story and the characters and are made to feel something, which in much of the entertainment world is sorely lacking.

I highly recommend seeing this production of Man of La Mancha and taking full advantage, as the cover of the program says, of a “Professional Broadway-Style Theater” that is right down the road from Berthoud.