Making the most of a ‘Second Shot’ 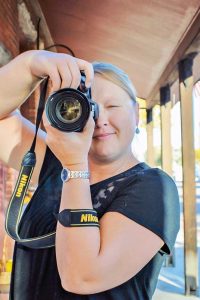 Berthoud resident and photographer RaeLynn Petrovich is caught in the moment taking a photo on Mountain Avenue. Petrovich started a photography business “Second Shot” after being diagnosed with cancer in 2010.
May Soricelli / The Surveyor

Tragedy often times becomes a catalyst for new life, as it inspires a person’s true purpose and potential to surface. For RaeLynn Petrovich, a cancer diagnosis at a young age altered her perspective of life and awakened her passion for photography. She now uses this platform to immortalize the beauty of life through her photographs.

“Right when it was the darkest in my life, the camera brought light,” said Petrovich. “It was a way to escape through the beauty of the world around me.”

A vibrant local woman with local roots, Petrovich was first introduced to photography as a student at Thompson Valley High School in Loveland. She knew deep down she was an artist, but at the time wasn’t aware of how much this talent would speak to her. After becoming a mother, her husband, Mark Petrovich, surprised her with her first digital camera as a Christmas present. Being a stay-at-home mother, she enjoyed the self-taught techniques she uncovered while her young daughter Kayla was her primary muse and model.

Living in Berthoud, Petrovich has embraced the ideal of education and community and has engaged with several families her daughter has gone to school with over the last five years, making an impact on many. “When I first met Raelynn, I thought ‘Wow this is one great lady,’ She is so passionate and full of love. And when I learned about all she had been through, then I saw how truly amazing she was,” said friend Alyssa Ryplewski.

“When I first met Raelynn, I thought ‘Wow this is one great lady.’ She is so passionate and full of love. And when I learned about all she had been through, then I saw how truly amazing she was,” said friend Alyssa Ryplewski.

When Petrovich was first diagnosed with breast cancer in 2010, at the age of 38, she was not surprised by the news. “I think I knew before I went in,” she said. At a stage zero cancer diagnosis she had a 99 percent chance of recovery. Despite the hope of a full and speedy recovery, Petrovich was still faced with heart-breaking questions: “Why did this happen? Did I do something wrong?” As a mother foremost, she resolved she would do anything to overcome the illness for her daughter, who was 5 years old at the time. Surgery was needed to remove the cancerous cells, but no chemotherapy was necessary. Doctors were optimistic for a full recovery. 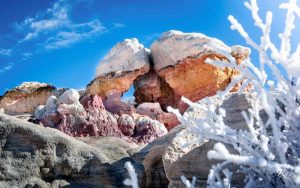 Petrovich’s landscape of the Colorado Paint Mines in Hudson was taken in the fall of 2012.
Photos courtesy of RaeLynn Petrovich/ Second Shot Photography

Seven months after the cancer had been originally removed, Petrovich sat holding her yellow Labrador puppy and felt a strange pain in the scar tissue from her surgery. What she discovered was another lump. Her concern was not reciprocated by doctors, with some even refusing to scan her, saying it was simply scar tissue. She knew instinctively there was something more, and it was at that moment she learned an imperative lesson she wishes to share with others: “You have to advocate for yourself,” she said, “Doctors are just people, and sometimes it’s hard for them to see the fringe cases or the ones that don’t fit the mold. So we have to do what it takes on our part and trust our instincts.” Tragically, her instincts were spot on. Due to the cancer’s return she began the painful journey of chemotherapy and radiation which lasted six months.

“I often say that my daughter has been my hero through this,” said Petrovich. After having lost all of her hair, and battling with many physical side effects, she recalls the comfort of the moments when her daughter would simply say, “Mom, you’re beautiful.” Even when walking in public, her daughter would often take a defensive stance against anyone looking at her mother.

“She would just look around like, ‘You better not look at my mom like that.’” Petrovich loves that through her pictures she can show her daughter what she used to look like, before the radiation, medication, and operations altered her appearance.

As the dust settled from the tumultuous treatment, new life was born in Petrovich as she allowed her inner artist to take over and photography became much more than a job ‒ it became her joy. “Everyone has that moment where they realize ‘This is what I am supposed to do,’” Petrovich said. That moment came as Petrovich looked back at a portrait taken of her family just before chemotherapy had begun. “I knew this was the last time I would be me,” she said. She realized how important it was to document her life, the process and the struggle, not just for herself, but for her family and others as well. For Petrovich, tragedy became the catalyst for new life. 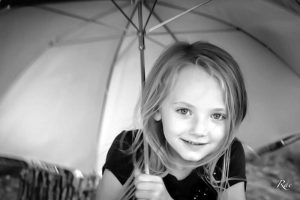 Through the lens of her camera, she experienced an urgency and delight in capturing the beauty of life and those she loves. “Pictures became so much more to me; they stir feeling and memories that are irreplaceable,” said Petrovich.

An opportunity for her gift to have significance came when she discovered her nephew was to be born with a heart defect. Petrovich felt it was important to use her talent to encapsulate the miracle of his life and the range of emotions experienced in the delivery room. She found purpose in preserving those priceless moments for her family.

Composition and lighting inspired her, especially when her shots highlighted the beauty in nature, in children, events, or even in pets. “It’s like magic, photographs, to have something that evokes those emotions when you look back at them,” said Petrovich. Her artistic eye is drawn to those candid moments where people are being themselves; whether in a family portrait, or a child playing, or a wedding celebration. “Most people skim over those moments and don’t get down in the depths of those emotions; I want every moment to shine,” she said. “It’s the legacy I will leave behind.” Some of her favorite photo-shoots are with high school seniors. “They have so much hope and anticipation, the way they express themselves and their unique interests at such a significant time in their life. It speaks to you,” said Petrovich.

Even though she had been told her whole life that being an artist wouldn’t bring in any money and not to pursue it, she found herself in her element. Tragedy became a catalyst for new life. Her goal was never money, yet people began to appreciate her gift so much they wanted to compensate her for it.

“It’s as though a reset button was pushed and now every moment was important to embrace,” said Petrovich. Last year, in support of her photographic passion, Petrovich’s husband thought of a name for her flourishing business: “Second Shot,” epitomizing her ever-optimistic approach to all she has been through. 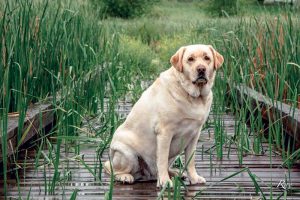 Petrovich loves photographing animals and wildlife. Photographed in this picture is the Petrovich’s family pet, a Labrador named Jack.

Her web page (raes2ndshotphotography.zenfolio.com) is currently being developed and, when it’s up and running, will allow her to sell her unique pieces. Her striking, close-up photograph of a wolf is currently on display in the window of Michael George’s Picture-This Custom Framing shop on Mountain Avenue.

Despite the difficulty she has faced, it’s apparent to many that through this hardship Petrovich’s own beauty has echoed the beauty seen in her work. “Raelynn is the kindest, truest person I know. She’s a gem. She has been a great inspiration, especially to my daughter, who rides horses with her. My daughter believes that she hung the moon,” said her friend Meaghan Hanes.

Petrovich’s positive approach to life has continued despite receiving news in recent months that the tumor markers in her blood are terminally high. The cancer has returned and at such a level that indicates it is now in the bone, making her diagnosis incurable. After years of undergoing costly treatment and care, the family can’t currently afford to pursue further experimental treatment. With the pooled resources of close friends in the community, fundraisers are being held in support of Petrovich’s battle against cancer. “I’m very humbled by all the support I’ve received from my friends. I feel very blessed,” she said.

For Petrovich, tragedy was the catalyst for new life.

In sharing the tumult of her story, there is not hopelessness or frustration in her eyes, but instead passion, kindness and, against all odds, joy. She uses her photographs as a source of strength. “It’s come full circle, art is a part of my life. I have always loved the way the camera feels in my hands.” said Petrovich. “I love capturing those beautiful moments that make you laugh or cry.”

FUNDRAISER FOR RAELYNN
• Close friends Meaghan and
Jared Hanes are hosting a funfilled
Cattle Sort Fundraiser for
Petrovich on Nov. 7 at 1800 N.
County Road 23 in Berthoud.

• All proceeds go directly to
Petrovich’s family. Lunch will be
offered and a bounce house for
kids will be available.

• Hanes’ daughter, 13-year-old
Kaitlynn, started a Gofundme page
for the family where anyone
can contribute.