The Loveland Rotary Club figured the best way to get weekend food packs to Berthoud and Loveland students is to start with a food drive — and what better place than holding it inside local grocery stores. 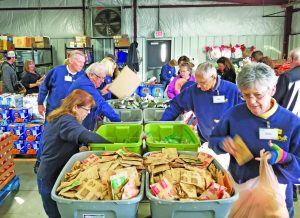 The second annual KidsPak City Wide Food Drive is scheduled March 2 – 4 at several locations in southern Larimer County. They include Hays Market in Berthoud; the two King Soopers, three Safeways and two Walmart stores in Loveland; and Walmart in Timnath.

KidsPak, a project of the Loveland Rotary Club operated under the Loveland Rotary Foundation, is a weekend hunger-relief program that provides enough food for five meals for food-insecure children attending schools within Thompson School District. The program, in its ninth year this school year, operates at 41 elementary, middle and high schools, and early childhood centers and is at all schools in the district except for one that decided not to participate.

“We are what is called a supplemental food program,” Carrigan said.

The meals meet the nutritional requirements of students and include protein, carbohydrates, fruit and snacks — the menu is developed by a registered dietitian at the Food Bank for Larimer County. The food comes from donations, food drives and purchases at the Food Bank, and the program gets its support from grants, foundations and individual donations.

KidsPak developed a list of needed food items for the food drive, such as spaghetti, pasta sauce, green beans, corn, fruit cups and peanut butter. Last year the food drive generated 16,200 pounds of food — the goal for this year’s drive is to collect 20,000 pounds.

During the drive, KidsPak volunteers and grocery staff will hand out flyers at each of the stores. The volunteers will be available during daytime hours.

At Hays Market, which is participating for the first time this year, the volunteers and staff will give shoppers a ticket listing the needed items they can select to be rung up by a cashier. Hays Market will gather the tickets to make an order of the items to deliver the following Wednesday to KidsPak.

“The Hays Market shoppers won’t have to actually collect the items,” said Maia Mattise-Lorenzen, communications coordinator for KidsPak and a Berthoud resident.

At the other stores the flyers will list the needed items and the aisle numbers where they are located, so shoppers can bring them directly to the cash register to make the purchases. The Walmart store at 250 W. 65th St. will have packages of food the shoppers can purchase through the cashiers, so shoppers will not have to look for the items. There also will be bins for shoppers to drop off food at all of the stores, except at Hays Market.

KidsPak is seeking volunteers to help out at the food drive as store greeters, store captains, and drivers and assistant drivers. They can sign up at SignUp Genius.

KidsPak was started by Jeff Douglas, a Rotarian and a volunteer driver, when he learned about the rapid rise of backpack programs across the nation. He contacted the school district to determine interest and, with the district’s approval, the program started the last three weeks of 2009, serving three elementary schools and 34 students.

An average of 50 Rotarians and community volunteers help pack the bags each week, which are delivered on 13 routes, also handled by the volunteers.

“The school district does a really good job Monday to Friday,” Corrigan said.”  We help on the weekends. Teachers are ready to teach and kids are ready to learn.”

Corrine Corrigan, volunteer coordinator and wife of Tom, said students who are not fed over the weekend are unable to learn new information until the middle of the week.

“These students are already two days behind every week,” she said. “How do you make that up? If it’s that way over the course of a year, they’ll never catch up. If we’re failing to feed them, it’s our fault they are not succeeding.”