Looking toward the future

Mary Cowdin is well-known in Berthoud. As the town clerk for over two decades, and a town employee for over three, Cowdin is a walking encyclopedia of Berthoud government and community. But come Jan. 1, Cowdin’s office will officially be occupied by another, as she retires after working for the town for 32 years. 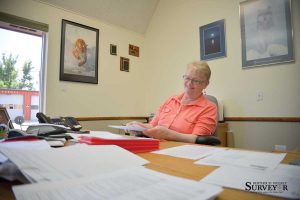 Berthoud Town Clerk Mary Cowdin goes through some of the applications from people who applied to fill her position after she retires at the end of
the year. Cowdin has been town clerk for 22 years, and has worked for the Town of Berthoud for 32.
John Gardner / The Surveyor

And for now, her only plan is to hibernate for the winter and take a few well-earned months off.

“I’m not even making a date to go out to dinner if I don’t feel like it,” she said. “I’m not planning anything or going anywhere; we’re not doing anything – just downtime.”

Cowdin has enjoyed her time working for the town she’s lived in nearly as long as she’s worked for the town. One reason she’s stayed in her position for so long is simply, as she puts it, because it never got old.

“I’ve enjoyed being here; I’ve never had any desire to leave because I was unhappy. I’m leaving because it’s time to retire, and I’m sure whoever sits here will do a great job,” she said.

The town has officially hired Berthoud resident Alisa Darrow as its new town clerk. Darrow’s first day was Oct. 5 and she will spend the next three months following Cowdin and learning the tricks of the trade.

And while Cowdin is looking forward to retirement, she knows it will be a little sad, too.

“Sure, I’ll miss the people that I work with,” she said. “I’ll miss seeing the people as much as I do; I won’t see them as often, but I’ll still see them.”

When Berthoud Town Administrator Mike Hart began working for the town Cowdin was his saving grace.

“Everyday challenges are much easier to meet when you have coworkers like Mary that are part of a team who is fully dedicated to serving the community and takes the amount of pride in their work as Mary demonstrates on a daily basis,” Hart said.

Cowdin’s institutional knowledge of the community and the professionalism she brings to the job each morning makes her one of the best clerks a community could hope for, according to Hart, and he admitted he’s going to miss having her around.

“Mary will be deeply missed by all of the employees here at the Town of Berthoud and also the current and past town board members, all of whom she has taken care of for a lot of productive years,” said Hart.

Hart initially joked that he had denied Cowdin’s request for retirement and was forcing her to remain for another two years.

As well, others, including Berthoud Mayor David Gregg, said Cowdin’s presence will be a huge void to fill.

“In my time with the board, since 2002, [Cowdin’s] been the rock of stability and a calm, pleasant, resourceful service to Berthoud and has been the glue that has kept us together and moving forward through so many fickle winds of political and personnel changes,” Gregg said.

From the first interaction with Mary, Trustee and Mayor Pro-Tem Jan Dowker said Cowdin has always been incredibly helpful in answering any questions about the town. And, when Dowker decided to run for trustee, Cowdin was the first person she went to get the information packet, and, like Cowdin always is, she was very helpful in making the piles of regulations and filing requirements simplified and manageable.

“She is one of my favorite friends, and the shoes she wears for the town as our clerk will never be filled with someone like her; with her love for and history with our town,” Dowker said. “She is the fairy godmother for our community.”
Cowdin said that being out of the loop as town clerk, about what is going on in the community, will take a little getting used to. But she’ll manage.

“Because, being here, you’re aware of so many things that are going on,” Cowdin said. “But that’s ok. I don’t see myself being sad about not being there.”

Mary Cowdin had just moved to Berthoud a few months before she was hired by the Town of Berthoud in 1983. She moved to Berthoud from Orange County, Calif., where she lived since the age of 9. She didn’t have a job when she moved here; she relocated because she had family in the area and liked the town and the Front Range well enough that it was worth a gamble.

“I liked here better than there,” she said, “and I decided to give it a shot and see what happens.”

The gamble paid off for Cowdin.

The first employment she found was working for Ball Areaspace in Boulder –where she worked for three months to the day – but didn’t particularly enjoy the commute or the work and wanted something different.

“I didn’t enjoy that job because I had hardly anything to do,” she said. “It’s a very long day when you don’t have a lot to do.”

Those who know Cowdin understand she likes to be busy.

Her first position with the town was as a receptionist. She didn’t become town clerk until 10 years later. The Town of Berthoud posted a job for a receptionist; duties included utility billing and other clerical work.

“I applied for it and probably harassed them into an interview,” she joked. “I think they gave me an interview just to get me to shut up.”

When she started at town hall, she had no idea she would spend the next 32 years working in the same office.

“No, I didn’t,” she said. “I liked it at the time so I didn’t see any reason to look elsewhere for work because I enjoyed what I was doing.”

When she started with the town there was only a town administrator, a town clerk, a part-time deputy clerk and a receptionist at town hall. There were also slightly fewer than 3,000 residents in town. Utility billing was done by hand; making photocopies of bills, stuffing envelopes and sending them out for payment.

“The good ol’ days,” she calls them. “When something breaks down and we have to do that now, it’s like, how did we ever do this?”

Cowdin started as a receptionist and remained in that capacity for the first two years. During that time she took over as court clerk as well, which she still does. Through the years she’s performed the duties of many positions at town hall that now have full-time positions, including finance and utility billing. However, even when the then town clerk left the position in the early ’90s, Cowdin didn’t apply right away.

“To be honest, I didn’t know if it was the job I wanted or not,” she said.

But on the last day before the application deadline, she applied.

Cowdin has worked with seven town administrators during her tenure. A lot of the duties have remained the same, being a statutory position; however, she also did all the town board meeting minutes. When she became town clerk, the town hired a full-time deputy to do the meeting minutes and manage some of the finance responsibilities.

One thing is for certain, in Mary’s time with the town, she’s never been bored at work. Well, almost never.

“We’re never sitting around doing nothing,” she said.

In her more than three decades on the job, it’s been everything but boring.

“Maybe once or twice when the power went out,” she said. “The phones weren’t ringing and you couldn’t see enough to file anything. But you never run out of things to do.”

If you ask her what a typical day for a town clerk is, her response is that it’s anything but typical.

“It’s never the same,” she said. “Some things are, like there are always phone calls and people calling with questions.”

But other than that, each day presented a new challenge and she never knew what she was going to be getting.

“You can’t really say, this is what I do every day,” she said.

The job is better now than when she was first hired, she said, as far as working hours go. Back when she first began, she worked six, sometimes seven, days a week just to get everything done.

“Sometimes I’d work from home because it felt less like I was working,” she said.

Cowdin has been much more than town clerk during her tenure. She’s been active in many organizations and events through the years, including the Lions Club and the Berthoud Area Chamber of Commerce. In 1988, Cowdin was the Chamber of Commerce board president when Berthoud celebrated its 100-year anniversary and the town had a multi-day celebration. It’s still an event that Cowdin is proud to have been a part of.

“It was a great four days, and I think most everyone in the community had a really good time,” she said. “There was a lot of participation and it was a lot of fun.”

As for her time being town clerk, she’s proud of the town that Berthoud has become. “I think we’ve made lots of positive strides in the community,” she said.

Most of her time with the town has been a very positive experience as well, she said, expressing very few negative aspects of the job.

“Working until 10 or 11 at night, after being in the office all day, that’s a negative, but it has to be done,” she said.

For the first time in more than three decades, Cowdin is actually looking forward to not be working on election night next April.

Cowdin and her husband, Pete Cowdin, have no plans to leave the area, either, she said. She’s just going to enjoy retirement hopefully as much as she enjoyed her career. As much as things have changed during her time as Berthoud’s town clerk, many things have remained the same as well.

“The downtown is still pretty much the same, besides different businesses; you still run into people you know at the post office every day. That is always the same.

As for retirement; “it’s just time,” she said.

“If you ask anyone who’s worked at a job for 32 years, I think they’ll tell you that you can retire,” she said. “And several people have said to me that I’m not going to like being retired and that I’ll be bored – we’ll see.”

One thing is for certain; Mary won’t likely be bored in retirement.

“It’s a personal choice,” she said.