In a press release, the county stated, “The move is a result of rapidly increasing COVID-19 case counts, positivity rates across all age groups, and significant impacts to hospital utilization within Larimer County over the past several weeks.” The statement said that “almost every type of business will be affected by this change.”

The news, coming less than a week before Thanksgiving and the traditional beginning of the holiday season, was devastating for many local business owners and employees, restaurants and breweries in particular as the move to level “red” means a suspension of indoor dining.

“This news is devastating, but we will pivot yet again and work hard to maintain our staff’s jobs,” Berthoud’s City Star Brewing said in a so 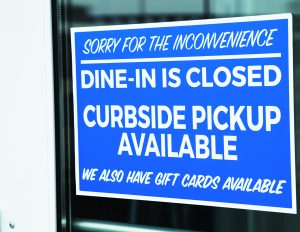 A group of Loveland businesses announced Monday that they formed the group Small Business for a Healthy Loveland and announced they would not comply with the move to “red” level and shutter their businesses. On Monday, Berthoud’s Grampa’s Café announced they would be defying the county’s order as well and will continue to operate under the level two (yellow) guidelines.

In a statement released, Clay Caldwell, owner of Mo Betta Gumbo in Loveland and one of the leaders of the group, stated, “While COVID is not a death sentence for the majority of people who get it, this order will be for many Loveland businesses. To follow this order would mean laying off dozens of people who then don’t know if they have enough to pay rent and give their family a nice Christmas.”

“These orders are no longer about public health, because if that were true, Mr. (Tom) Gonzales (director of Larimer public health) and his department would actually take the whole health of the community into account. We can’t just solve one problem; we have to have a dialogue about how we work together as a community,” Caldwell’s statement continued.

In a news conference held Tuesday morning in Loveland, Morgen Harrington, one of the owners of Grimm Brothers Brewhouse announced the group has “over 65 and counting” businesses in Loveland alone, ranging from health clubs to spas and salons to restaurants and breweries, including Berthoud Brewing Company, have signed the letter submitted to Gonzalez and the Larimer County Health Department.

“The board of health jumped the orange level using the number for the state, not the county, Loveland is even less, that’s foolishness,” Caldwell said during Tuesday’s news conference. Harrington added that they care deeply about everyone who has been affected by the pandemic but that they care about their employees livelihoods as well. She stated the jump from level two to level four was done using the state’s numbers, not Larimer County numbers

“12.3 positivity rate as of last night, that is for the state of Colorado, Larimer is at 5.3 positivity rate, these numbers are not the numbers we should be using to shut down our county,” Harrington said. “Using the states numbers for what is happening here is not a direct picture … all we’re trying to do is get communication with our local government that fits our local community, not a blanket practice, our goal is to find a way to make this work for everyone.”

Outgoing Larimer County Commissioner Steve Johnson, who has been a vocal opponent of the lockdown orders that impacted businesses throughout the County, stated on social media, “Unfortunately, the State and Local Health Department have stopped following science,” and argued that Larimer County should consider creating a program similar to one used in Mesa County, which includes Grand Junction, where even if the state orders a stricter level businesses who meet certain thresholds can remain open.

While some business have stated they will not comply with the new level four (red) standards, and will continue to operate under level two (yellow) stipulations, others are left scrambling to find ways to make their businesses work and keep as many members of their staff getting a paycheck as possible.

Owner of one Larimer County restaurant, whose establishment employs 29 people including several who are single mothers, said, “It’s reinventing yourself every day. It’s why I don’t sleep at night.” He said that should the “red” order remain in place for any length of time, he will be forced to consider taking the path of noncompliance.

“We’ve gotten through it before and we’ve learned some things from the first time but we got a loan the first time, it’s going to be difficult without the loan this time, the PPP loan did help and without that PPP loan we will have some difficulties and we might be able to survive a few more months,” the owner said. “I don’t want these stricter rules but I understand why they’re there and we’re going to comply and we’re going to do the best we can to comply but if we see we’re sinking we might have to find new avenues.”

At this time the restaurant plans to comply with the new order and is outlaying significant resources to provide a warm, outdoor area where patrons can enjoy food and drink but admitted it’s a difficult task to make outdoor seating tolerable as winter approaches. He said his concern with those businesses who are not going to comply with the “red” level stipulations could cause a further backslide with increasing infections, saying “it’s hopefully one step back to take two steps forward but if some decide to take two steps back there might not any going forward.”

On Friday, the Surveyor reached out to Katie O’Donnell, Larimer Community Relations and Public Information Supervisor, with questions pertaining to the move to level four but did not receive a reply by deadline.