Four years ago former Grace Place pastor, Kim Land, saw a need in the Berthoud community and decided to act. That summer Berthoud’s Lunch in the Park Program was born. 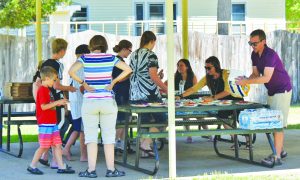 Photo By Katie Harris
Volunteers from Calvary Church in Berthoud serve pizza to a hungry crowd on Wednesday. The free lunch program is open to all elementary-aged Berthoud students.

“It all began because a lot of communities have summer lunch programs, usually provided by the elementary schools, for kids who wouldn’t necessarily have a lunch otherwise,” said current Lunch in the Park coordinator, Lisa Adams.

Adams said, for whatever reason, Berthoud schools don’t have such a program, so Land decided to start one.

“Originally she started the program through a grant,” said Adams. “The idea was that kids could have lunch in the park once a week for free.”

As the years passed the grant went away, but the program continued on, thanks to local churches and businesses who were willing to pitch in.

“This is done completely on a volunteer basis,” said Adams. “Grace Place, New Freedom Church, Calvary Berthoud, Berthoud Surveyor, and a woman from the school district are each taking two weeks this year, and Brick Oven is also helping by giving us a discount on pizza.”

Adams said the volunteering organizations are in charge of selecting what they want to serve, and recent menus have included sack lunches, hot dogs, and Frito pie.

“All we ask is that the organization provides some sort of food and beverage,” she said. “Grace Place always has a lot of fun with it during their weeks and gets crazy inventive.”

“The list of participating organizations has dwindled somewhat over the years because it’s in the middle of the work week, middle of the day, and it’s hard to get there,” she said. “It would be nice to have enough groups so that we each take only one week a year and can just kill it.”

This year Adams said the number of kids that show up each Wednesday for lunch ranges from 80 to 150.

“We see the same kids week after week,” she said. “These kids have come to depend and rely on us. You know it’s in their little minds that on Wednesdays they’re going to get lunch. I couldn’t imagine Lunch in the Park not being there for them.”

While the program currently targets elementary schoolers, advertising in the kids’ school take-home folders in the spring and through posters displayed downtown, Adams said she hopes to extend the invitation to middle schoolers in the future as well. For the time being though, she said no child of any age would ever be turned away.

“There is a lot of church involvement, but it’s not specifically a church thing,” she said. “It’s open to everyone.”

Lunch in the Park takes place every Wednesday in June and July from noon to 1 p.m. outside Berthoud Pool at 200 N. Seventh St. Anyone interested in volunteering their time or donating food can contact Lisa Adams at 303-250-6297.