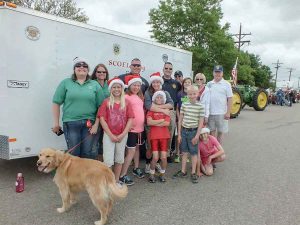 A year’s worth of effort finally paid off for board members, officers and volunteers with the Larimer County Santa Cops organization on Dec. 17. From their first planning meeting of the year back in January, to their final application night earlier this month, it all led up to this; delivery day, when officers finally had the opportunity to see the look on children’s faces as they played Santa for a day.

Thirty years ago Larimer County was one of the founding counties for Santa Cops, a nationwide program which provides wrapped gifts to children of families with limited budgets at Christmas.

The program was started locally by Fort Collins businesswoman Kathy Louderback, who approached local law enforcement agencies for help. In its early years Santa Cops was run out of the basement of the old dog track where Medical Center of the Rockies is now located.

Since then, the number of applications and number of toys and monetary donations generated has fluctuated, according to Steve Wicker, deputy with the Larimer County Sheriff’s Office and chairman of the board for Santa Cops of Larimer County for the past four years.

He said the number of families helped has varied between 830 and 1,138 in recent years, with 2013, the year of the flood, being the lowest in several years. Wicker said this was likely do to added support from other agencies during that time.

Last year 903 families were helped, for a total of over 3,200 kids. Of those families that received gifts, Wicker said approximately 50 were from Berthoud (including rural Berthoud) and Campion.

This year 947 families applied with a total of 3,126 kids; 36 of those families were from the Berthoud/Campion area.

Through Santa Cops each child whose family applies receives three gifts from their wish list, making the total of gifts wrapped and given out each year near 10,000.

According to Wicker, anyone needing help during the Christmas season can apply. He said the Santa Cops program isn’t about income level, it’s about the kids and Christmas.

“Our only qualifications are a Larimer County address and proof of identity for the kids,” said Wicker. “We don’t want families just on the cusp of needing help to think there’s a restriction on them just because they’re barely getting by.”

Through toy drives, generous donations from businesses such as Caldwell Banker and Walmart, and donations from community members, many of which Wicker said are families who received gifts from Santa Cops in the past, the program is able to assist every family that applies, every year.

Officers, their families and friends, gather together during the 12 wrap nights that take place each year to fulfill each family’s wish list. Gifts are chosen from the “Santa’s workshop” of donated items, which include toys, clothing, books, sports equipment, diapers, make up, and nearly anything else you can imagine. The gifts are wrapped, labeled, and bagged for delivery.

Wicker said each wrap night takes around 80 volunteers to run successfully. Combined with five to 10 volunteers that run each of the eight application nights in November, there are over 1,000 volunteer hours put in to make the magic happen.

On delivery day, law enforcement officers, members of search and rescue and community corrections, and the district attorney come out to deliver the hundreds of wrapped gifts.

“We want to create a positive experience between children and officers in the area of giving,” said Wicker. “We want children to see officers as normal people, who reach out to the community and give back a little bit on that day.”

With another successful year under their belts, board members are looking forward to January, and the start of a new Santa Cops planning season right around the corner.

For families interested in applying to receive gifts for their children next year, Wicker said flyers will be sent home from the schools prior to application season, and that www.facebook.com/SantaCopsLC/ is another great way to follow the process.

For those interested in donating, gifts can be dropped off at any law enforcement agency for pick up year round. There’s also a “donate” button at www.santacopslarimercounty.org, and donations can also be mailed to the address on the website.