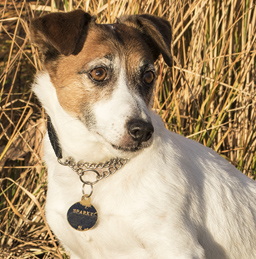 Every dog has its day, and for two four-legged Berthoud locals, they are hoping that day will come for them on September 29 at the eighth annual American Humane Hero Dog Awards® in Beverly Hills. Sparky, a 10-year-old Russell Terrier and Fritz the Schnauzer from Berthoud will be competing against 265 other courageous canines for the nation’s highest honor recognizing Mankind’s best friend. Voting by the American public to choose this year’s top American Hero Dog starts now at www.herodogawards.org.

Weighing in at 15 pounds, Sparky was an unlikely candidate for Sherlock Hounds Detection Canines, a pro-active narcotics dog program used to keep schools safe. This mighty terrier took on work with vigor, but while he excelled at finding drugs, his specialty was connecting and creating bonds with the hard to reach kids. After a drug bust, Sparky would sit close with the distraught student and offer consolation. Often he would lick their hands and even jump up in their lap as if to say, “You’ll be fine.” Tears streaming, many kids would then smile. One day a rough looking teen approached us in the hall with a swagger. He looked intense. Sparky trotted towards him with confidence and the boy grinned when Sparky got closer. He dropped to his knees, cooing to Sparky who performed his signature back flop to get a belly rub. They had an eye to eye moment and then the young man told Sparky how he used to get high every day, but with Sparky coming to the school he was nervous he would get busted as well as disappoint Sparky. He said that he had quit using drugs and now wanted to go to college. He thanked Sparky for the help and told him he loved him. This is one example of many. For eight years, Sparky performed his tasks with a combination of skill and affection. When he retired from Sherlock Hounds Detection Canines, many of the young people he had inspired over the years regarded him as a hero.

Fritz is a miracle rescue dog in that he had medical conditions so serious that he was not expected to live and was recommended to have been put down. His recovery odds were very slim ( please see youtube video by Dr Wendy Harley Certified Vet “Fritz is determined to walk again”). Lisa, his owner, was broken-hearted having just lost her aging dogs  and was depressed to discover Fritz’s condition. Fritz has inner strength that has driven him to recover and be enabled to give back. Fritz became a service dog visiting residents of  Apple leaf assisted care living center and Lisa’s mother who was almost 95. He is clearly a hero!

Sparky and Fritz are competing in the Emerging Hero category. 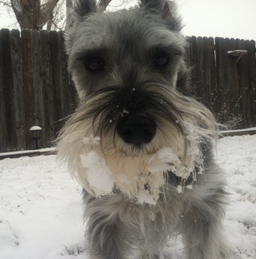 Local dog lovers and those across the country are invited to visit www.herodogawards.org and vote once per day for their favorite dogs in each of seven categories.

Following the first round of voting, which ends April 25 with the selection of 21 semifinalists (the top three in each category), a second round, featuring a combination of public and celebrity voting, will narrow the field to the seven category finalists. The winning dog in each category will be flown to Los Angeles and celebrated at a red carpet, star-studded awards gala on September 29, when this year’s American Hero Dog will be revealed.

Winners in each category will earn $2,500 for their designated charity partner and the overall winner’s charity partner will win an additional $5,000 prize. Each charity partner is dedicated to celebrating the role of working dogs in our lives, and like American Humane, celebrates the importance of the human-animal bond.

“Our best friends do so much to improve and even save our lives, and every dog owner knows about the extraordinary, unbreakable bond they share with their dog,” said Dr. Robin Ganzert, American Humane’s president and CEO. “The American Humane Hero Dog Awards are our way of celebrating the power of the human-animal bond, which has been a core part of our organization’s mission for 141 years.”

For more information about the 2018 American Humane Hero Dog Awards®, and to vote daily in the contest, please visit www.herodogawards.org.