Local couple has been capturing Berthoud sports for over 30 years

While shooting youth soccer teams on a Saturday morning at Pioneer Park, Christy Riggins, co-owner of Westwind Photography, points out several children she remembers from past years. Camera shyness, a short attention span, or a model’s enthusiasm for being photographed are the personality traits she affectionately recalls when she sees their young faces. 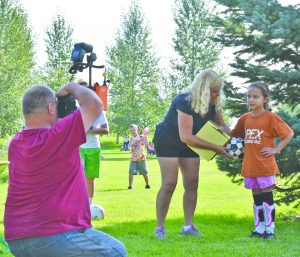 For Christy and her husband and business partner Roger, the best part of running a sports photography business in Berthoud for the past three decades is watching the kids grow from year to year.

“I see these kids’ faces on my computer screen when I edit photos,” said Christy. “It really helps me recognize their faces. Many of the high schoolers that we’re photographing now we’ve been taking pictures of since they were in kindergarten.”

The Riggins have been shooting Berthoud recreation sports since they started their business in 1986. Longtime Berthoud residents whose children and grandchildren were brought up in Berthoud schools, the couple seamlessly transitioned to self-employment in the photography industry after working as sports reporters and photographers for the Berthoud Recorder in the early 1980s.

“I went to high school in Berthoud and so did Allen Coseo (Berthoud Parks and Recreation director at the time,) and he gave us our big start,” said Christy. “We were slower back then, but that’s how we got into it.”

From there, things only continued to grow. The couple gained the Loveland Recreation contract in 1992 and soon began photographing league sports, before recently gaining the contract to design banners for the Thompson School District’s senior sports.

While the Riggins have taken wedding, senior and family photos in the past, they said sports photography is truly their niche, and one which has kept business booming since the early days of Westwind Photography. But, as with any business, hurdles were bound to pop up as the industry evolved.

“The biggest challenge we’ve had over the years is the switch from film to digital,” said Christy. “We had to learn a lot, after developing our photos in a darkroom for so many years.

“Now I do a lot with Photoshop. Digital is more work, but I have a lot more control now and with that comes better pictures.”

As business has continued to grow, the couple has worked hard to maintain the small, family feel of Westwind Photography, enlisting their children and grandchildren to help during the busy seasons.

“This is a really busy time for us now, doing all the high school pictures, and then we’ll move into Berthoud rec and Loveland rec, and we’ll spend the end of October getting all the pictures out to everyone,” said Christy. Once November rolls around, the couple said they’ll enjoy a bit of downtime camping and riding their ATVs.

As Roger snaps photos and Christy dashes back and forth with notepad and pen, keeping track of names and directing young subjects on how to pose, the couple is momentarily distracted by the mother of a young soccer player heading their way.

“We took pictures of that mom when she was a kid,” Christy reminisces. “She went to school with my daughter, and now I get to photograph her daughter.”