It takes dedication to keep up with family and friends, homework and sports, and prepare for county fair as a 4H member. Luckily, dedication is something the youth from the Berthoud Highlanders 4H club know all about. 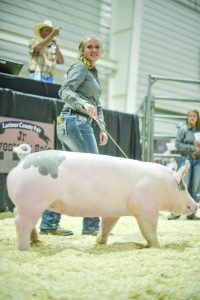 “The thing that makes their 4H story great is they stay active in 4H while being active in many other activities,” said club leader, Suzanne Cavey, of the young people in the Berthoud Highlanders club.

Almost all of the members in the club participate in at least one other extracurricular activity, from competitive sports to symphony. Several members hold leadership positions in other local clubs as well.

“Now they are focused on their [4H projects], but many of them are taking care of all of that while they participate and excel at a plethora of other activities,” said Suzanne. “And although they have full plates, they can’t wait for the fair.”

Suzanne’s own daughter, Emily Cavey, is a shining example of what hard work and dedication look like. In addition to her membership in 4H, the 15-year-old was the number-one scorer on Berthoud High School’s (BHS) varsity basketball team last year, runs track, is a member of BHS Future Farmers of America club (FFA), and was involved in show choir for years.

“Varsity basketball and animals pretty much take up my whole life year round,” said Emily.

As the winner of the Round Robin Showmanship Competition five years running, Emily’s hard work has paid off. The competition takes place between the showmanship champions in steer, horse, llama, goat and lamb. Each champion must show all five animals and answer questions from judges regarding each species. The overall winner in each age group (junior, intermediate, senior) earns the title of Round Robin grand champion.

For Emily, winning five years in a row has only made her hungry for more. She’ll be taking sheep and pigs to this year’s fair, hoping to bring home another trophy.

“I love showmanship because you’re the one being judged, not just your animal,” she said. “As my first year in the senior division it will be a lot more challenging this time because everyone else is older.” 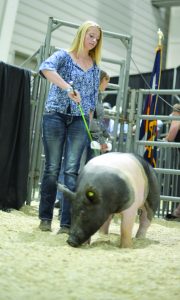 Sisters Rebecca and Susan Pennock are no strangers to hard work either. The two have a combined 17 years invested in 4H and participate in a range of activities; including FFA, National Honors Society, student council, swim team and cheerleading.

Rebecca, an incoming senior at BHS, is the current president of the Berthoud Highlanders club as well as an officer in FFA. She’s won overall grand champion at county fair twice and at state fair once for cake decorating and was invited to attend the National 4H Conference in Atlanta in 2015.

The 17-year-old said, despite her busy schedule, she makes time for 4H because of the opportunity it gives her to do what she loves. Having lived on a farm in Berthoud her whole life, she said she enjoys passing on the knowledge she’s gained to younger 4Hers almost as much as she enjoys applying it to her own projects.

“If I didn’t spend time with my animals every day it would feel like something was missing from my life,” she said. “They’re part of who I am.”

Susan, at only 15 years old, qualified for state this year in archery and has already completed enough units in the cake-decorating project to teach classes to beginners within 4H herself.

Although she has a commitment to cheer practice three nights a week, Susan said she makes 4H a priority in her life because it gives her the opportunity to give back. 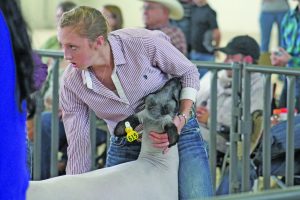 “I love meeting new people and doing community service projects,” said the hopeful future pre medical major. “4H teaches me to come up with new ways of doing things and gives me life experience outside of taking care of animals.”

With fair just days away, the three won’t have to wait much longer to find out if their hard work pays off in the form of a grand champion ribbon or, perhaps just as importantly, pride in a job well done and experience to last a lifetime.

“I’ve learned that if you work hard, it makes you a better person even if you don’t win,” said Emily. “It’s about having fun and making connections with your animals.”

For Rebecca, being involved in 4H in addition to Thompson Valley Swim Team, National Honor Society, student council, and FFA is all part of the end game – a career in the agriculture business.

“It’s fun to do all these different things because they let me meet a lot of different people and help others in every way I possibly can,” said Rebecca. “I hope that all the stuff I’ve done will help me with the rest of my life.”