Kevin Griffith’s life was saved by a gift from a stranger. After years of weekly medical intervention and deteriorating health, a successful kidney transplant in October gave him not only a much-improved quality of life but a future that he looks forward to.

In 2011 Griffith, who at the time was 49 years old and living in California was diagnosed with Polycystic Kidney Disease (PKD) an inherited disorder in which clusters of cysts develop primarily within the kidneys, causing the kidneys to enlarge and lose function over time. For Griffith the only initial indication that something was wrong came from routine bloodwork during a visit to the doctor. The hidden disease had been taking a toll however and resulted in damaged kidneys that he described as looking like “swiss cheese.”

By 2014 Griffith was in end-stage renal failure and had to go to dialysis 12 hours a week, every few days, to artificially have the job his kidneys were unable to do completed and filter the toxins out of his body. Fluid retention between treatments for Griffith meant he could lose over 10 pounds of fluid in the matter of a few hours following treatment. The increase in fluid puts immense stress on the cardiovascular system and other organs. 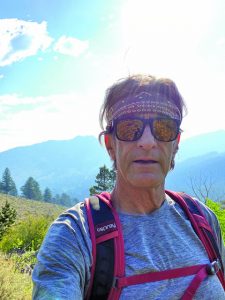 Courtesy photo – Kevin Griffith a kidney donation recipient doing one of his favorite past times, hiking.

The treatments, time-consuming and costing between six and seven thousand dollars per visit, left him on a weekly rollercoaster he said, “It makes such an impact on life and your body is drained, you literally crash afterward.” Although individuals can live for decades utilizing dialysis Griffith said that eventually, “The body just gets tired, it does have an impact and it shortens one’s life.” The wait began as he was placed on the kidney donor registry. Time was of the essence.

Later that same year he was also diagnosed with an unrelated cancer which automatically made him ineligible for a transplant – he was removed from the list.

After a very difficult season, which included cancer, a job loss in the tech industry and divorce, Griffith moved to Berthoud in 2017 at the suggestion of an old friend who lives west of town where he says he was able to, “… reset, rebuild, and refocus on my next chapter.” A year later, clear of cancer he was able to go back on the donor registry.

Griffith who had lived an active lifestyle enjoying surfing and hiking, was not one to sit back and let life happen to him, he went to work along with two family friends developing a website, Kidney4Kevin.org and other efforts to help find a match and willing donor as his condition continued to deteriorate. The website and subsequent social media campaign was initially developed to find a match for himself but became an effort to educate the world about the organ donation process. “Most people don’t step up out of fear, I want people to be informed, we only need one kidney, it’s the only organ in our body that we have a spare,” he commented.

Griffith had three potential donors along the way, none of which panned out. One heart-felt attempt came from a teenage girl who had stumbled on his search for a donor on the internet. She had reached out because her dad who was Griffiths age had been diagnosed with cancer earlier in the year and died within four months, he said, “She couldn’t help him but saw my post and thought she could help me.” Unfortunately, the girl was too young to donate to anyone outside of her family. Grateful for the care of those who reached out as time and disappointments mounted, he said “I stopped holding my breath.”

With the COVID-19 pandemic sweeping across the world Griffith was one of the many who were particularly vulnerable to infection. Spending much of the year isolated or in the outdoors when he could. Due to the outbreak, all elective procedures were put on hold in many states including Colorado and because a person can technically still go to dialysis, kidney transplants were considered elective. According to Griffith, sadly thousands of kidneys were discarded during that time. In the late summer as numbers began to decline elective procedures began again.

Finally, nine years after his diagnosis, late in the evening on Friday Oct. 9, now age 58, he received a phone call, “I was sitting on the couch the phone rang and I could see it was UCHealth,” a nurse at Anschutz Medical Campus was the voice at the other end. The woman on the phone asked what he was doing to which Griffith said he wasn’t doing anything, she replied, “Well you’re going to get your butt down to Anschutz by 3 a.m. -you’re up.” He said suddenly life became “immediately surreal.”

After arriving at the hospital with COVID-19 restrictions in place Griffith sat alone and was informed that the kidney was coming from a recently deceased person, “I sat there waiting for my room for at least an hour, all I could think of was somebody just died and I’m getting that person’s kidney – it was so profound – it was heavy.”

The operation which took several hours was a success. Friends and family volunteered as his “team” including his son who flew from California to be with him and helped get him through the first few weeks post-transplant.

A new regiment of anti-rejection medications will continue throughout his life, more than 20 different pills taken throughout the day to ensure his body doesn’t turn against the new kidney, but his prognosis is good. 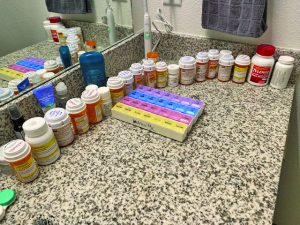 The lineup of medications Giffith is required to take.

Griffith who is the happy owner of a new lease on life is continuing to recover while he pursues his entrepreneurial endeavors that include a decades-long dream coming to fruition with a media company and business associated with the surfing industry. He also remains passionate about advocating for kidney donation “I want my story to be a resource for others,” he said.

According to the National Kidney Foundation there are currently 121,678 people in the U.S. waiting for an organ transplant of those, like Griffith 100,791 need a kidney. Unfortunately, 13 people die every day waiting.

“I’m so dang grateful, beyond measure because I had my life taken from me and now I have it back and in a bigger way than I could have ever imagined,” he said reflecting on the gift he received and the life he has ahead of him.

For more information about kidney donation visit kidney4kevin.org/#info and kidney.org.