The town of Berthoud has received the final report from the internal investigation conducted by the Larimer County Sheriff’s Office in regard to their response to two rallies that took place in Fickel Park in July and August 2020. 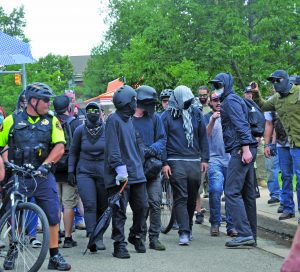 Photo by Amber McIver-Traywick – Counter protestors are escorted back to their vehicles by officers during the “Back the Blue” rally on July 26, 2020.

The report includes 17 pages of information about the planning and initial information received by the LCSO about the events, a “Back the Blue” rally held on July 26, and a “Black Lives Matter” protest held on Aug. 1, including a detailed account of the response plan, details about how the response was executed and issues of concern. LCSO had a presence at both events and utilized both bike patrols and the LCSO Posse.

The catalyst for the investigation came after town officials received complaints from members of the public who attended the rallies. At a virtual Berthoud town board meeting on Aug. 11, seven callers criticized the actions of some of the counter-protesters who were reportedly verbally harassing BLM rally attendees, which included one former and several current town trustees. The complaints also included criticism of how the Larimer County Sheriff’s Office deputies handled the rallies. Many of the callers also criticized Sheriff Justin Smith, saying his “political leanings,” influenced the actions, or perceived inaction by the LSCO deputies.

At the Sept. 22 Berthoud town board meeting trustees voted to request an internal investigation about the handling of both incidents be completed by the LCSO with findings being presented to the town within 90 days.

The LCSO report summary received by the town this week concludes that, “Overall, the decisive action by the bicycle response team and posse, prevented a major disturbance.” There were no official police reports filed of damaged property or harassment, no injuries reported and no use of force was, “reasonable or necessary.” View the full report by following the link: LCSO report

The report does indicate that throughout the rally and disturbances, several people made comments to deputies that they were assaulted, however, no official reports to law enforcement were made.

Also noted in the report were several “heated arguments and flag-waving incidents” that took place throughout the event and were observed by deputies, but did not escalate to requiring law enforcement intervention. The report indicates that as arguments would become heated, deputies would move closer to the area and the parties would eventually separate and move on. According to the report deputies stated they did not see any weapons brandished towards any other person present and all weapons stayed holstered.

During both rallies, deputies involved in direct contact with citizens had their Body Worn Cameras activated.

Accompanying the report was also a letter from Sheriff Justin Smith. In the letter, Smith stated that it is critical to understand the LCSO’s approach to public demonstrations which the report addresses, and that, “A few individuals have questioned why the LCSO did not take a zero-tolerance approach to bad behavior or minor violations. Let me first acknowledge that deputies did observe behavior that was below community standards and expectations. There was name-calling, taunting and offensive slurs and even a handful of scuffles witnessed by the end of the events. However, the courts have established that often the right to free speech is protected even when it is coarse and offensive. That standard was strongly emphasized by our state legislature earlier in the year when they established a new, much broader civil action against local peace officers for nearly any violation of a person’s constitutionally protected rights.”

Smith ended the letter by saying, “Given all the possible outcomes, in the end, while I was disappointed with the behavior of a relatively small number of persons who attended, I was satisfied with the response of our personnel and pleased that neither side felt the need to escalate in the weeks and months that followed.”

The Berthoud Board of Trustees will review the LCSO report at a future meeting.