Sometimes all it takes is a moment to impact an entire life. That’s exactly what happened to this year’s Larimer County Rodeo Queen Elana TerAvest. For her, a flash of red, white and blue and the rhythm of galloping hoof beats when she was just a young girl defined who she would one day become. 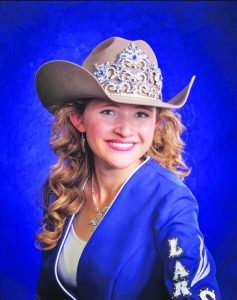 “My grandfather started taking me to rodeos when I was about 3,” she said. “I would watch that girl on the fast horse carrying a flag and I was just memorized by it. I thought ‘I want to be that girl.’”

Born in Russia, TerAvest’s adoptive parents brought her home to Berthoud when she was 15 months old. The now 18-year-old graduated from Berthoud High School (BHS) this past spring.

One of her proudest accomplishments during her time at BHS, and one that helped pave her way to rodeo royalty this year, was the role she played in forming the Berthoud Equestrian Club.

The teenaged rider who’d taken English riding lessons since age 4, before transitioning to barrel racing in eighth grade, felt it was high time horseback riding was recognized as a high school sport in her hometown.

“Back in my sophomore year was when my mom and I had the idea,” said TerAvest. “Horses were my number-one passion and I was sad to never see a high school riding club since all the other sports had one.”

“I had a small group of horsey friends who were all on board right away,” said TerAvest. “They told their friends, word spread, and people wanted to be part of it. An equestrian club was something no one had ever seen before at the school and everyone wanted to know more.” 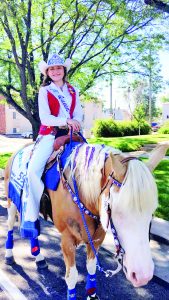 TerAvest poses for a picture during a parade appearance.

The only rules for the club, which is going strong in its third year, is participants must attend at least 50 percent of the meetings and complete 100 riding hours in order to letter. Club meetings often include guest speakers and cover topics such as equine first aid and equine careers.

“We had over 20 girls letter last year, which I thought was pretty cool,” said TerAvest. “Some compete on riding teams, and some just have a passion for horses and want to be part of a club.”

With TerAvest heading off to college this fall, her mother will oversee the club on her own for at least the upcoming school year. TerAvest said she plans to stop by and say hello whenever she can get away.

“This club has meant a lot to me; it’s like I left a legacy at the school,” she said. “I love that I got to share my love and passion with other people.”

As for her own future, in the fall TerAvest will head off to University of Wyoming on an academic scholarship to study animal biology, bringing her horse along with her.

“My ultimate goal is vet school,” she said. “I definitely see myself having horses when I’m older. I would love to live on a ranch in Wyoming someday and make a life that way.”

Before she can head off to college though, the rodeo queen has her hands full with rodeos, parades, sponsorship events and community service projects.

She said one of the events she’s most looking forward to is the Dog and Pony Show at the Larimer County Fair on Aug. 5 at 7 p.m.

“I’ll be doing the grand entry, then running back to my trailer for a quick costume change, turning around and coming right back out for a reining performance,” said TerAvest. “I’d really encourage people to come out for that event. It’s a lot of fun.”

Of course, the highlight of this year’s county fair for the rodeo queen goes without saying. Her dream of waving the American flag on horseback for a packed arena will at long last come true during the Larimer County Rodeo Aug. 6-8.

“As a girl, when I’d see the rodeo queen ride by I’d just be left speechless. If I can have that impact on one little girl myself, that would mean so much to me.”