For the best teams, the whole is greater than the sum of its parts. 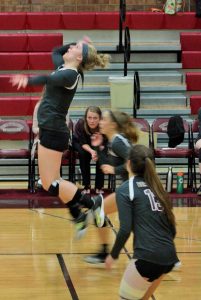 Halfway through their 2017 Tri-Valley Conference (TVC) schedule, the Berthoud High School (BHS) volleyball team is still working on achieving that championship-level cohesiveness. It is not to say Berthoud is not a good team – because they very much are – but after a dozen games, the team is a tick or two behind the cream of the TVC crop, even with a talent-laden roster and a head coach who owns a state championship ring.

It was evident on Tuesday night in Windsor that Berthoud has not yet developed the on-court synergy needed to achieve their goal of making a third-straight trip to state. Miniscule lapses and minute errors cost Berthoud against their TVC rivals as they lost in straight sets, 25-22, 25-18, 25-21.

“I agree with that,” said Berthoud Head Coach Mil Santos. “I think that we can hang with them for a certain amount of time and then we let them run four, five points, and that’s hard to do. Giving your good teams, your Holy Families, your Windsors, any help they can get, they’re going to run with that.”

Berthoud battled Windsor nearly point-for-point throughout the match, but it was the Lady Wizards who proved better able to avoid mistakes and take advantage of those made by Berthoud. “I feel like their tough serving really contributed to (the errors),” said Kailey Berry. “But I feel like we let our own errors get into our head and that led to more errors.”

Kills from Julie Ward and Kailey Berry and a block from Teagan Holmes helped Berthoud take a 7-4 lead early in the first set. Windsor countered, taking leads of 17-14 and later 21-18, but the Lady Spartans answered; soft kills from Holmes and Cas Berry, an ace from Ward and a savvy attack from Abi Lutz saw Berthoud knot the match at 22-all. Windsor eventually held serve at match point and a long rally that saw a stellar block from Cas Berry and an equally-incredible dig from Windsor eventually ended with the Lady Wizards getting the set-winning 25th point.

The back-and-forth nature of the game continued in both the second and third sets, yet, in each, the Lady Wizards took advantage of Berthoud mistakes to quickly rattle off scoring runs. Berthoud held a 5-4 lead in the second set before Windsor rapidly scored six-straight. An attack from Berthoud’s Sophie Kathol found an empty space on the right side of the Lady Wizards front line to get the side-out for Berthoud. Late in the set a kill from Lutz got Berthoud to within one, 18-17, but Windsor scored seven of the last eight to take the set 25-18.

The Lady Spartans took an 11-9 lead in the third set before Windsor rattled off six-straight to take control. Berthoud did battle to keep things close, cutting the Lady Wizards lead to one on a couple of occasions. Back-to-back serving errors, one on each team, made the score 24-21 in Windsor’s favor before a final kill from Tannah Heath clinched the set and match for the hosts.

“We need to clean up a few things. I know the un-forced errors is one of those, and the other one is controlling the ball,” Santos said. Kailey Berry echoed her coach’s comments, saying, “Right now I think we just need to figure out who we are. I feel like we need to work on our ball-control, really work on reading the defense. Our skill is there, we just need to work on competing together.”

Berthoud (6-6, 4-3 conf.) will be on the road for their next two, traveling to Holy Family and Erie before returning home to take on Skyline on Oct. 10.