Every game has a turning point, that sequence, often times very short, that has an inordinate influence on the final outcome.

Playing their season opener in front a large crowd on their home floor Tuesday night, the Berthoud High girls basketball team picked up a 53-47 win over visiting Greeley Central. A critical stretch at the very beginning of the second half saw two wild momentum swings with Berthoud ultimately getting the upper hand.

Emerging from halftime with the score 21-15 in the Lady Spartan’s favor, Central came out firing, three Berthoud turnovers led to five Central points and less than 40 seconds into the third quarter, the Berthoud lead was chopped to just a single point, 21-20. 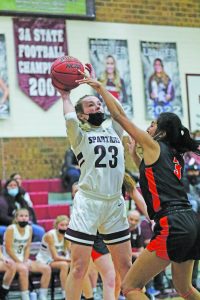 Photo by ACP Media – Berthoud senior Sidney Premer goes up for a shot over Greeley Central’s Alexis Tapia in the season-opener on Tuesday night. The teams traded blows throughout the game but some clutch play late pushed the Lady Spartans to a 53-47 win.

Over the next minute of game time, Berthoud was able to right the ship. Four points, two of which came from the free-throw line from junior Aidan Carr got the Lady Spartans back to a more comfortable five-point lead.

“That was huge, if we didn’t answer to that, the whole story of that second half would have probably been so different. A big part of that was the energy of the whole team, the bench, everyone,” said Carr, who posted a double-double on the night with 15 points and 12 rebounds.

Being able to force turnovers and then convert on offense is central to Berthoud’s overall strategy but the second part was not working as well as hoped in the first half. The second half, however, was a different story.

After re-establishing control, Berthoud put their press defense to work, forcing multiple Central turnovers and capitalizing on the offensive end. Carr made good on an and-one, part of her team high 15 points, while senior Anndee Davidson swished a three-pointer to push Berthoud’s lead to 31-20 at the 5:19 mark of the third quarter.

“The way we play defense, it’s built to have runs of six or of eight at a time and we had that run right at the right time when we needed it at the beginning of that third quarter,” explained Berthoud Head Coach Alan Gibson. “I think throughout the entire game our defensive intensity and anticipation was great and then once you get those steals, that’s only half of it, you have to finish off on the other end and we struggled at times with that part.”

Junior Lilly Strait added another three-pointer for Berthoud at the 1:36 mark of the third to push the Lady Spartans’ lead to 10, 36-26, but Central refused to fold. Berthoud’s guests put together a 10-0 run that spanned a four-minute stretch from the end of the third quarter to the beginning of the fourth.

With the score suddenly tied at 36 with just 4:50 of game time remaining, the experience of Berthoud’s battled-hardened seniors made the difference. Superstar senior Ally Padilla broke the tie with a jump shot, Addy Kirkpatrick converted a free-throw and Davidson swished a pair from the line.

“It shows how much experience and knowledge and playing in the clutch comes into view when you have people who have been in there before and have been in the same situation and succeeded,” Gibson said of his seniors. “It’s exactly what we expect from them, they did it without hesitation, got some big buckets, drove and got some free-throws, it was huge.”

Leading 45-43 with just over a minute left, Davidson drained her third trey of the game, a bucket which brought the hometown crowd to their feet and took the wind out of Central’s sails. “Mostly it was the open shot, but I do like that left side, I have a lot of history shooting from that side,” Davidson said of her clutch, late-game three-pointer. “It does help that I’ve got a lot of playing time in the past and with the game that close, I just had to take that shot, the energy from the whole team was really great tonight.”

With a 48-43 lead, the game was all but over. Central did keep fighting, scoring four, but the Lady Spartans kept their guests at arm’s length as Davidson and Padilla each converted from the line and Carr drained another bucket to make the final score 53-47.

“What we’re aiming for this year is trying to play with the same amount of intensity, the same amount of aggression and the same amount of success no matter who is in there. We just want to make sure we’re strong and we can finish at the end,” Gibson said. “You never know exactly how things are going to go, when you can get it going and get that first win under your belt against a quality opponent that is very important.”

Berthoud will travel to Falcon for their next game on Thursday before coming home to play a Saturday afternoon contest with Erie.