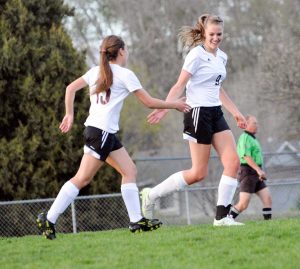 Berthoud’s Hannah Stippich (9) celebrates a goal she scored in the first half with Courtney DeMoudt.
John Gardner / The Surveyor

The Berthoud girls’ soccer team defeated the visiting Roosevelt Rough Riders 2-0 in the season finale at home, Wednesday night. The win, in front of the hometown crowd, was a great way to end the up-and-down season, according to head coach Corbett Leatherwood.

“It’s crucial for the seniors to be able to go out on top, but it’s critical for the girls who are returning to have that positive energy around the end of the season,” coach Leatherwood said. “I’m really proud of the girls for pulling together like that.”

It was a bittersweet ending for five seniors including; McKenna Nauss, Carolina Garcia, Courtney DeMoudt, Gioconda Celentano, and Jannett Beltran, as their season and high-school career ended. But at least they walked away with a win.

“[The seniors] were awesome,” said Leatherwood. “They played great tonight.”

Three of the five seniors–Nauss, DeMoudt and Celentano–even collaborated on a play that culminated in the game’s second goal during the second period. Freshman Elizabeth Bosnich advanced the ball toward the goal and passed it to Celentano who sent the ball across the field to an awaiting DeMoudt. DeMoudt passed the ball backward to an awaiting Nauss who ultimately scored the goal. Nauss, who typically plays midfielder, played a lot of the game as a forward. The goal was her first of the season, according to Maxpreps, and it was a sight to behold, according to Leatherwood.

“That was beautiful,” he said of the play.

The Spartans’ first goal was scored by junior Hannah Stippich in the first period off an assist by DeMoudt. That was the goal that really got the Spartans amped up.

“That was a battle,” Leatherwood said.

Stippich has progressed all season long, according to Leatherwood, and she’ll be a strong returning player next year. Leatherwood said that he told her to focus on ball possession and using her strength and size to muscle through and win the ball when confronting opponents.

“That’s exactly what she did to make that goal,” Leatherwood said. “She never quit, she never backed down, she persevered and she got that goal.”

It was Stippich’s third goal of the season.

In the second half, the Spartans kept the pressure on Roosevelt goalie Kelsey Kammerzell with Berthoud’s Jade Glasser and McKayla Workman each having several shots on goal that narrowly missed the net.

But it was Berthoud’s defense that stepped up and adjusted to different formations, said coach Leatherwood. That was a huge reason for the win, he said, as well as goalie Hayley Leatherwood who had eight saves on the night.

“At times, it was a very physical effort,” coach Leatherwood said. “[Roosevelt] had some good shots on goal and Hayley did a nice job of putting her body in the way, bringing the ball in and doing what she needed to do.”

The closest Roosevelt came to scoring came in the second half when Roosevelt’s Jessica Meek pushed through Spartans defenders and was able to get a shot on goal, which Hayley Leatherwood blocked. The ball bounced back toward Meek, but Hayley pursued and dropped onto it, saving what could have easily been a Roosevelt goal.

All in all, the Spartans played well against a struggling 2-11 Roosevelt team, to end their season 6-7-1 overall. But the season’s record doesn’t fully capture the achievements made this season, Leatherwood said.

“I think everybody wants to win more games, but if you take the scores out of it and you look at the individual growth of each player this season, and then how the team began to work as a unit, I am very pleased with where we ended up.”

While the season ends with this victory the Spartans won’t see any post-season action. However, it was a season of positive growth and accomplishment, according to Leatherwood. The Spartans lose five players this year to graduation, but they could possibly return as many as 13 varsity players, including nine juniors. That situation has Leatherwood eager for next season.

“We started out [the season] pretty strong and we faltered a little bit towards the latter half of the season,” Leatherwood said. “But the movement is growing.”