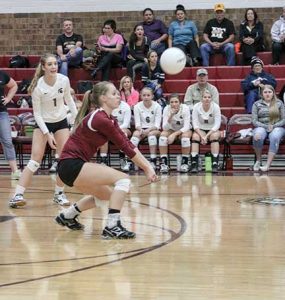 Berthoud’s Sarah Howard returns a serve during a contest earlier this year at Berthoud High School. The Spartans have won four straight and six of their last seven contests going into the final weeks of the season.
Photo by Paula Megenhardt

There is no column in the standings for ugly wins. And while Tuesday night’s home match with Tri-Valley Conference (TVC) rival Roosevelt may not have been their prettiest of the year, the Berthoud High School (BHS) volleyball team was able to scratch out a 3-2 victory (11-25, 27-25, 26-24, 18-25, 15-9). The win marks Berthoud’s fourth-straight, and sixth in their last seven, as they prepare for the final week of the regular season.

While the win was welcomed, Berthoud head coach Daisha Agho expressed some frustration with the play of her team, which she called, “flat as a pancake.”

“Coming out we’ve got to have some energy, we’ve got to have some fire,” Agho said. “We were giving up too many points in the beginning of the game and then we have to play catch-up and thank goodness we’re good enough to do that but we should just come out and pound the ball and not have to worry about that.”

Berthoud was able to split the first four sets but did not look like the team they have been most of the year until the decisive fifth set. Tuesday night marked only the second time of the year the Lady Spartans have been pushed to the maximum length of play.

Being in the unfamiliar position of having to play a do-or-die fifth set seemed to light a fire under Berthoud as the Lady Spartans did not allow Roosevelt to assemble any multi-point scoring rallies in the final set.

“I think we just needed to bring up our mental toughness a little bit,” senior setter Jessa Megenhardt said. “I think we realized the situation and how important this game was and, honestly, I think we just came out and started to have more fun.” Star outside hitter Julie Ward had four kills in the set and Kailey Berry added another two for Berthoud before the set- and game-winning 15th point came on a Roosevelt attack error.

The Lady Spartans responded to a 25-11 defeat in the match’s first set by taking leads of 5-2 and later 14-8 in the second but their usually-dominant offense had, at times, an almost ad-hoc nature and was not firing on all cylinders. Berthoud’s block scored crucial points and aces from Megenhardt and Sophie Kathol provided key scores late in the set.

Berthoud rallied from a 20-14 deficit to take the third set and once again it was their block and serve that kept the match within reach before the attack came to life. Ward, Teagan Holmes and Berry scored kills that helped Berthoud eke out the 26-24 win. Said Megenhardt, “I think we were a little frantic the first few sets and then we started to calm down. We started figuring out those spots to hit and were swinging much better near the end.”

Playing last Thursday in Mead, the Lady Spartans were able to exact revenge on the Lady Mavericks, winning the match in a 3-0 sweep (25-17, 26-24, 25-23). Ward paced Berthoud with 10 kills on the night while Holmes and Shay Pierick were money on Berthoud’s front line, combining for 13 blocks. Four Lady Spartans reached double-digits in digs with Ward contributing 19, Kathol 18, Megenhardt 14 and Cas Berry 10.