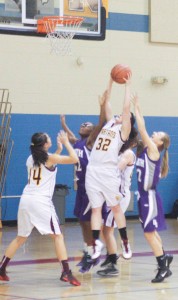 The Berthoud High School girls’ basketball team began its season winning three of its first four games, all on the road. The Lady Spartans bested Weld Central 44-40 in the season opener and then won the first two legs of the Manual Girls Early Season Tip-Off Tournament by topping Rangeview, 48-30, and dominating Denver South, 35-9, before falling in the championship bout to Ponderosa, 59-32.

Juniors Maria Fate and Taylor Armitage have been the driving forces for the Lady Spartans through their first four games. Fate scored 36 points and pulled down 34 rebounds in the three-round Manual Tourney while Armitage tallied 31 points and 18 boards.

While the afore mentioned pair of juniors led the way for the Lady Spartans, Berthoud got contributions from up and down their lineup with senior Audrey Kouns, juniors Lindsey Erickson and Sydney Kouns and sophomore Sarah Howard all making their presence felt on both ends of the floor. The strong play from the whole Lady Spartans squad was needed as the team played the tournament without standout junior and 2013-14 Tri-Valley Conference Player of the Year Kristina Cavey, who missed the tourney’s three games with a knee injury.

Much as they had done in their season-opener at Weld Central, where they went on a 12-2 run in final period to win the game, the Lady Spartans finished strongly against Rangeview. Ahead by only nine entering the final period, Berthoud hung 19 on the board to clinch the win by a comfortable-looking 48-30 margin. Fate’s 15 points and 11 boards, both team highs, marked something of a breakout game for the junior forward, who played more of a complimentary role for the Lady Spartans last season.

Fate again registered team highs in points (16) and rebounds (11) for Berthoud in the semi-final game of the Manual Tourney. It was a dominating performance by the Lady Spartans; Berthoud held the Lady Rebels of Denver South scoreless in the first half, taking a 24-0 lead into the locker room at halftime and ultimately cruising to 35-9 win.

Despite their stellar play in the first two games, Berthoud hit a bit of a wall in the title bout of the Manual Tournament. Parker-based Ponderosa High School took control of the game early, holding 10-point edge, 25-15 at halftime before blowing the game wide-open with a 23-point third period. The Lady Spartans struggled, shooting just 26 percent from the floor and 47 percent from the free-throw line and committed a whopping 24 turnovers.

Despite their lackluster performance in the final game of the Manual Tournament, the Lady Spartans sit at 3-1 on the young season and have to feel good having won a pair of road games in convincing fashion, even with Cavey out of the lineup.

The Lady Spartans play their final two games of the Spartan Classic beginning Friday night when they host Vista Peak at 6:30 p.m. and then turn around and play Lutheran at 1 p.m. on Saturday afternoon.