The train that is the Berthoud High School girls basketball team keeps rolling. 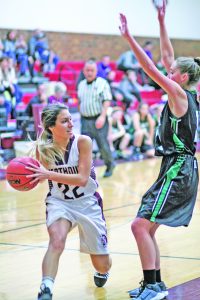 Berthoud’s Eriana Rennaker (left) prepares to pass the ball around a Summit defender in game three of the Spartan Classic last Saturday at BHS. Berthoud won all three games to take first place in the tourney.

Berthoud continued to make mincemeat of their competition over the weekend at the Spartan Classic, topping Mountain View 54-36, Pueblo East 73-51, and Summit 64-20 to take the first place trophy in the annual tournament. Through their first seven games of the year, all wins, the Lady Spartans have out-scored their opponents by 225 points, or an average of more than 32 per game.

“It’s a great group of girls who are determined, who are together and resilient,” Berthoud Head Coach Alan Gibson said. “I think they really embrace the variety on offense and defense and they are able to do multiple things.”

Perhaps most impressively, Berthoud is winning games in different ways. Against Mountain View, Berthoud entered the fourth and final period in an unfamiliar place, trailing on the scoreboard. After scoring only eight and seven points, respectively, in the second and third quarters, the Lady Spartans found themselves down 30-28 going into the final eight minutes of play.

Then Berthoud turned it on and out-scored the Lady Lions 26-6 in the fourth period to win by the lopsided 54-36 final. The Lady Spartans struggled mightily shooting the ball through the first three quarters and, even after their shots started finding the bottom of the net in the fourth, finished the night shooting a paltry 21-percent (18 of 85) from the floor. Yet the pressure defense Berthoud employed throughout the game never allowed Mountain View to get ahead by more than a few points.

Two days later the contest with Pueblo East began in similar fashion. Berthoud missed their first four shot attempts and committed six turnovers as they struggled against the Lady Eagles full-court press. Pueblo East led 19-13 after the first period and pushed their lead to 11, 28-17, with 3:32 remaining before halftime. That’s when Berthoud got hot, Eriana Rennaker hit a jumper, and then Emily Cavey drained a three-pointer on the next possession.

Ashlee Burdette hit a three of her own just as the buzzer sounded, to cut East’s lead to just one at half, 30-29. Burdette came back from the 10-minute intermission without breaking stride. The senior got a put-back after snagging an offensive rebound and then stole the ball and made a lay-up to put Berthoud up 33-30 – and providing a huge momentum swing in Berthoud’s favor – before even one minute had elapsed off the third-quarter clock.

“It was huge. It was a momentum switcher, even though halftime was in between, she picked it right up after that and those seven points were big and it gave us a lot of confidence, a little breathing and room and it came from a senior leader,” Gibson said of Burdette’s momentum-shifting seven-point outburst.

Burdette was humble, crediting the team with the come-back and adding, “When we’re down we really focus on working as a team and taking good shots … and having that momentum after that three going into half, we were four down and then we were only one down, it was good to come out hot.” Burdette’s quick scores propelled Berthoud on a 9-0 run to take a 39-30 lead.

Yet the Lady Eagles continued to battle eventually cutting Berthoud’s lead down to one, 43-42, late in the third, but Berthoud stayed strong and never relinquished the lead. The fourth period saw Berthoud get hot from the floor, just as they had two nights prior against Mountain View, to run away with the game. The Lady Spartans out-scored East 29-9 in the final eight minutes.

“It was a game of adjustments, these girls are very intelligent, they have a very high basketball IQ, and we did a couple things adjustment-wise that we haven’t practiced before, and they were able to see it and make it work,” Gibson explained. “We won one game with a pressure defense, a zone-type, and then tonight we won with a different type of defense that did it for us.”

Burdette echoed her coach’s sentiments about the team’s ability to adjust, saying, “Tonight we started off in a zone and then we realized they were really good outside shooters … and so we went to a man, and that was an adjustment that really helped us out. It’s just about being able to learn to play against the other team.”

In the final game of their weekend, Berthoud took Summit to the proverbial woodshed and won the game in the opening eight minutes. The Lady Spartans forced 15 turnovers in the first quarter and out-scored their opponents 24-1 in the frame. Berthoud added 40 more points in the next three periods but only allowed Summit to get 20 in the game, including a goose-egg in the fourth.

As Cavey explained, “A big thing for us since Coach Gibson has come in has been shooting, we’ve focused on being better shooters, we work on shooting so much, that’s been a big key … we’re not vulnerable at any spot, we don’t have problems at any spot on the court.”

After topping Silver Creek by a 70-33 final on Tuesday night, Berthoud, now 7-0, will close out the pre-Christmas portion of their schedule with trips to Niwot on Dec. 15 and to Thompson Valley on Dec. 19. After the break, the Lady Spartans will begin their conference schedule when they travel to Erie on Jan. 3.