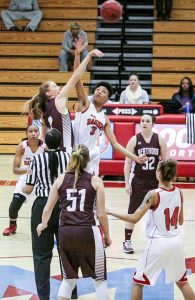 Berthoud’s Kristina Cavey gets the jump ball against
Rangeview’s Jaelin Jones to start the Spartans’ 63-53 victory.
Karen Fate / The Surveyor

To say this season has begun well for the Berthoud High School girls’ basketball team is a bit of an understatement. After sweeping Jefferson, Ponderosa and Rangeview High Schools to take first place at the Manual Tournament in Denver, the Lady Spartans find themselves at 4-0 in the early throes of the season.

Even though preseason expectations were high, having out-scored their opponents by a combined 293-152 through four games has left long-tenured Berthoud head coach Randy Earl impressed with what he has seen.

Truth be told, a 4-0 record is what close observers of the team expected the record to be at this point in the season. Berthoud beat Weld Central 79-33 in the season opener back on Dec. 1 and then crushed Jefferson 90-17 in the opening game at Manual on Dec. 3.

Topping Ponderosa, a team with a 4A classification that plays in a 5A conference, by 12, 61-49, and besting 5A Rangeview 63-53 to win the Manual tourney, is not what Earl pinpointed. It is not winning but rather the way the team wins that has Earl so pleased.

Through the opening four games, Berthoud has scored 293 points, the best mark in all of Class 4A, an average of 73.3 points per game, and have shot an impressive 49 percent from the floor and 74 percent from the free-throw line.

“That’s the thing I see, the shooting percentage and the number of points we’re scoring every game are probably the two biggest things,” Earl said.

Berthoud shut out Jefferson 24-0 in the first period and held a 54-11 lead at half on their way to the 90-17 rout that represents the highest point total in Earl’s history at BHS. While standout forward Kristina Cavey, who leads Berthoud in scoring, rebounding, assisting, stealing and blocking average on the season, hung 29 points on the board and pulled down six rebounds in just over 16 minutes of floor time, Berthoud’s enormous lead allowed the team to get its reserves some valuable experience. Junior Morgan Schachterle scored 14 points on six-of-seven shooting and grabbed a team-high 12 rebounds.

“We got people in that don’t usually get in, and everybody performed pretty well,” Earl said. “Morgan [Schachterle] and Zoe Goreski and Kyleigh [Milan] got a lot of minutes and they did very well.”

In the final game at Manual the Lady Spartans faced Rangeview, a school with more than four times Berthoud’s enrollment, and entered the fourth quarter tied at 43. Berthoud doubled-up the Lady Raiders 20-10 in the final period to win the game and take first place in the tournament.

Cavey again led the Lady Spartans with 22 points, while senior Taylor Armitage added a season-best 21 and Maria Fate scored 10 while pulling down a game-high 12 rebounds.

Being seriously challenged by Rangeview was something Earl welcomed, as it was the first true test his team has gotten this season. The coach also said it gave the team some things on which to work.

“We had too many turnovers in the Rangeview game; we didn’t rebound all that well,” Earl said. “Our perimeter defense wasn’t all that good so those are some things we need to work on; some things we need to get better at.”
Berthoud (4-0) plays its final two games of the Spartan Classic against Vista Peak and Lutheran on Dec. 9 and 11, respectively. The Lady Spartans will host Denver-based Bishop Machebeuf on Dec. 15 and travels to Loveland to play Thompson Valley on Dec. 18 to conclude the pre-conference portion of their schedule. After Christmas break Berthoud tips off its Tri-Valley Conference schedule with a trip to Erie on Jan. 5.