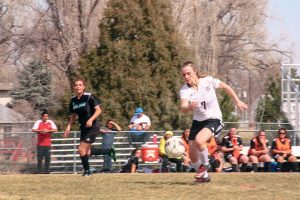 Berthoud’s Jade Glasser moves the ball up the field at home against Westminster
on March 12. The Spartans won the contest 6-0.
Angie Purdy / The surveyor

Irrespective of the specific sport, executing the fundamentals, having good communication among teammates, and possessing strong in-game leadership are the ingredients to a winning formula.

It is those three things Berthoud High School head girls soccer coach, Corbett Leatherwood, is working to impart to his team. And at the Lady Spartans home-opener on Saturday March 12, the coach liked what he saw.

Berthoud dropped their season-opener two days prior, losing 7-1 to Tri-Valley Conference (TVC) foe Erie but bounced back in big way against visiting Westminster by notching a 6-0 shut-out win with five Lady Spartans getting in on the scoring frenzy.

“I am very pleased with the adjustments the girls made from Thursday’s loss to Erie. The difference I noticed from Thursday to today was the step up in intensity and leadership of the team as a whole,” Leatherwood explained. “That leadership and intensity translated into better passing, marking, communication and decision-making. Those actions resulted in a better outcome.”

Leatherwood, who played Division-One college football and played on a pair of state champion high school soccer teams, explained lessons from all sports transfer to one another saying, “I think in all sports you can say you want to be defensively sound, you want to connect on your passes, and you need to communicate. I believe it is, fundamentally, discipline to the small things that makes the difference. The win is an end result, or a by-product, of doing things right.”

Stiker Jade Glasser, one of 12 seniors on the Berthoud squad, got the action started early, scoring on an assist from McKayla Workman just two minutes into the game. It was the only goal the Lady Spartans would need on the afternoon as the home team’s defense controlled the ball for much of the game. Yet the team added five more, just for good measure.

Glasser, who led Berthoud in scoring last season, scored her second goal on the game with 19:48 left on the first-half clock on an assist from the younger of Leatherwood’s two daughters on the team, Kyley Leatherwood.

Just minutes earlier, senior Lauren DeMoudt stole the ball, dribbled through the Westminster defense and scored Berthoud’s second goal of the game at 29:26 mark. Then it was Workman, set up on an assist from senior Lindsay Erickson, who scored next with 18:34 on the clock.

The goal was an important one for Workman, who tore the ACL in her left knee as a sophomore and was held without a score last season. Workman explained the rehab process was challenging but now her left knee is actually stronger than her right. Said Workman, “It felt really great [to score]. My junior year was a rough season, I didn’t score or really do anything … but this senior year with our team doing really great now it just feels awesome.”

Late in the first half Berthoud scored their fifth goal of the game when Kelly Parrish, crashing in from her right midfield position, booted one into Westminster’s net when a shot attempt from Kyley Leatherwood bounced off the hands of the goalkeeper and back into the field of play, allowing the perfectly-positioned Parrish the wide-open goal.

Late in the second half, Coach Leatherwood opted to sub out his eldest daughter, Hayley Leatherwood, from the goalkeeper position and put Megan Schmad in net. Schmad held her own, preserving the shutout for Berthoud, while Hayley Leatherwood contributed to Berthoud’s offensive output by scoring on an assist from sister Kyley with 7:51 remaining in the game.

The family mindset of the Berthoud squad runs deep. Workman, both Leatherwood girls and sophomore Elizabeth Bosnich all have parents on the team’s coaching staff. It’s something that Workman explained helps fuel the senior-laden Lady Spartans as they aim for a winning season and berth in the state tournament.

“We have 12 seniors this year, and we’ve all played club together so we want to get far,” Workman explained. “We have playoffs in our mind, and we’re going to try to get that. I think our main thing is just to play as a team, because our team here at Berthoud is mostly family.”

For his part, Coach Leatherwood agrees, saying, “I’ve challenged them to leave a legacy here this year … we’re very competitive and want to win, I personally hate losing and I know the girls do too.”

In a defensive battle that saw neither team score in the first half, Northridge edged the Lady Spartans in overtime by a 2-1 final on Monday, March 14, in Greeley. An overtime goal from Northridge’s Maryssa Lucero just 2:42 into extra time clinched the win for the Lady Grizzlies on their cold and wind-swept home pitch.

Berthoud (1-2, 0-2 conf.) will welcome TVC rival Roosevelt to Max Marr Field for their next game on March 23.