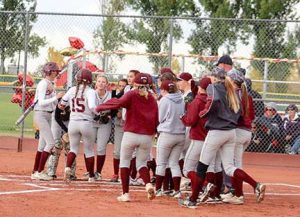 The Lady Spartans welcome Addie Spears to home plate during the contest versus Windsor on Oct. 6 in Windsor.
Photo courtesy of Tiffany Rafferty

There probably could not have been a more perfect way for the Berthoud High School (BHS) softball team to finish their regular season than the way they did. Berthoud dominated arch rival Windsor in mercy-rule-shortened fashion, winning 16-1 on the road on Oct. 6. With the win, the Lady Spartans finished the regular season with a 12-7 overall record that included a 9-5 mark in Tri-Valley Conference (TVC) play and in doing so qualified for the postseason.

“It’s big. Tonight we jumped out on them big, we put our foot on their throat and we finished them,” Berthoud Head Coach Buddy Kouns said. “I’m proud of them because that’s what we need to be doing next week.”

It was as complete a performance − and against a quality opponent − that the Lady Spartans have turned in all season. Berthoud got contributions from every spot in their starting lineup; all nine players tallied at least one base hit on the afternoon and eight contributed RBI. Pitcher Sarah Jorissen threw all four innings, allowing Windsor to scatter only six hits and score one earned run, while the Berthoud defense behind her played error-free in the field.

“This is definitely big for us. We’ve been a little slow the last few games, we’ve kind of lost our edge later in the games, and it’s nice to keep it rolling today and keep our energy up,” said senior catcher Hannah Langer. “It’s definitely a big win to boost our confidence going into regionals.” Langer was a perfect four-for-four from the plate with two doubles and two RBI.

Berthoud jumped out big right off the bat, pushing eight runs across the plate in the top half of the first inning. Sophomore sparkplug Addie Spears led off the game with a double and scored on Jorissen single two at-bats later. Two fielding errors by Windsor and hits from Delaney Fouts, Ashlynn Balliet, Langer, Sotera Dageenakis, Morgan Schachterle and Tristan Pope followed before Spears, batting for the second time in the frame, blasted a homerun over the left field fence.

As Kouns explained, the Lady Spartans had jumped out to big leads in other games this season only to allow their opponent to claw their way back into the game. That did not happen against Windsor, as Berthoud added two more runs in the second inning and three each in the third and forth to keep their conference rivals at bay. Windsor was able to scratch out their lone run of the game in the third inning by stringing three singles together, but at that point Berthoud was holding a commanding 13-1 lead.

“I think it boosts our confidence more knowing that we can keep going through every inning. Windsor is a good quality team, and to beat them the way we did makes us think we can beat any team out there,” Langer explained.

Kouns was obviously pleased with the effort and with the result. The coach has spoken multiple times about how his squad needs to be playing their best ball late in the season and, by closing out the regular season with wins over Windsor and Holy Family, both of whom also qualified for regionals, the Lady Spartans enter the postseason on a hot streak.

Said Langer, “I definitely feel like we’re peaking at the right time … we’re peaking right when we need to; there’s nothing more you can say.”

The Lady Spartans will compete in the double-elimination regional tournament on Oct. 15 in Erie. Berthoud drew the 17-seed and will play 16-seed Golden in their first game. One-seed Erie and 32-seed Montrose comprise the other half of the bracket. Two wins are required to qualify for the state tournament that will be held the following week at the Aurora Sports Park.