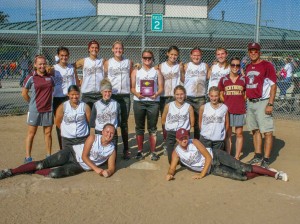 The Berthoud High School Lady Spartans celebrate their championship victory in the Maroon Division at the Spartan Classic Tournament on Sept. 6 at Barnes Softball Complex in Loveland.
Jan Dowker / The Surveyor

It can be amazing what one small change can make. Something that may seem minute or even insignificant can, if altered, make a world of difference.

That fact has not been lost on Berthoud High School softball coach Ashtin Williamson and one of her star players, first baseman Madi Herbert. By making a slight change in her swing mechanics – keeping front leg straight through her swing – Herbert broke out of a hitting slump, helped her team end a three-game losing streak and win the Spartan Classic last weekend at the Barnes Softball Complex in Loveland.

Herbert broke out of her slump, which she said lasted “like a year and a half” in a big way Friday night in the second of the tournament’s four games. After being one-hit in a 4-1 loss to Valley in the opening game, The Lady Spartans found their groove Friday night. Herbert went one-for-three with a two-run homerun in Berthoud’s 11-0 thumping of Lamar, she went two-for-three with a pair of round-trippers in Saturday afternoon’s 7-0 win over Sterling, and capped off the weekend with a two-for-two performance at the plate that included a two-run homer in the third inning to give the Lady Spartans a 5-3 lead on their way to a 7-4 win over Greeley West.

Said a modest Herbert Saturday afternoon, “My coach has helped me and I have finally started hitting the ball again.” Williamson was a little more verbose, explaining, “By forcing your front leg to stay straight, it pushes your hips back automatically. Her and I have been working really hard on focusing on just one thing at a time and she’s taken the advice and put it into play; she’s very coachable and it’s paying off quite a bit…she’s hitting the (heck) out of the ball!”

It was in the third inning of tourney’s final game where everything came together for the Lady Spartans. Delaney Fouts, Larissa Royer and Hannah Langer set the table for Berthoud by each notching a single to load the bases for the three-four-five hitters – Taylor Armitage, Jessi Boruff and Herbert – who comprise heart of the order.

Armitage hit a fly ball that landed in the mitt of Greeley West left fielder Jessica Lieser but was deep enough to score Fouts from third. Boruff then ripped a single into the left-center gap to drive in Royer and Langer. Herbert followed with a homer that allowed herself and Boruff to trot home and give Berthoud a 5-3 lead, one they would not relinquish.

It was exactly as the Lady Spartans prefer to play – have their speedy slap hitters at the top and bottom of the order get on base by any means necessary and then have the big bats in the middle clean up the base pads. Asked about exactly that after the game, Williamson said, “Ideally that’s how we’d like things to work every game, but it all came together for us. We’ve been working really hard, so it was nice to see it all come together.”

“I think we’ve learned a lot over this tournament, we’ve gotten back into the rhythm of winning, trusting each other a lot more and learning from our mistakes,” said Herbert.