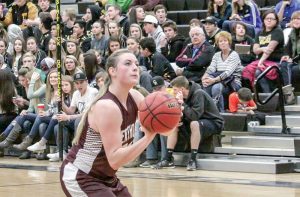 Berthoud’s Taylor Armitage steps to the line during the Spartans’ 58-57 victory
over Thompson Valley in Loveland on Dec. 18.
Karen Fate / The Surveyor

Just barely over a third of the way through the season, the Berthoud High School girls’ basketball team finds themselves just about where they expected to be. With only one blemish on their record – a 10-point loss to 3A powerhouse Lutheran in the final game of the Spartan Classic on Dec. 12 – the Lady Spartans sit at 8-1 and are currently ranked 10th in Class 4A.

Berthoud won their final two games before the two-and-a-half week break for the holidays, easily dispatching Denver-based Bishop Machebeuf 69-30 at Berthoud on Dec. 16 and then winning in thrilling fashion over Thompson Valley 58-57 on Dec. 18.

The victory over winless Thompson Valley took a little more work than the Lady Spartans had probably anticipated. Seniors Kristina Cavey and Maria Fate, Berthoud’s two leading rebounders, found themselves in foul trouble early in the game. Their absence from the game helped allow Thompson Valley senior Maddy Dickens, the Lady Eagles’ leading scorer, to hang a team-high 26 points on the scoreboard, eight of which came from the charity stripe.

Yet two-time all-conference center Taylor Armitage shined for Berthoud. The senior scored a game-high 29 points and drained the game-winning basket – a 3-pointer as time expired – to give the Lady Spartans their eighth win of the season and send the team into Christmas break on a positive note.

“We have a lot of experience on varsity, but they need to remember that they have to stay focused. That’s what happened in the second quarter [vs. Machebeuf] was they just lost their focus and let them back in the game,” said Berthoud Head Coach Randy Earl. “As long as we can keep focused and remember to play defense the way we can we will be alright.”

Berthoud got a taste of how even a brief loss of focus can alter the course of a game. After having taken a 17-4 lead after the first period against Machebeuf, the Lady Spartans began committing turnovers, playing lax on defense and taking ill-advised shot attempts in the second period. These self-inflicted wounds allowed the Lady Bison, led by athletic senior Jonni Smith, to double-up Berthoud 18-9 in the second quarter and cut the home team’s lead to just two, 25-23, at halftime.

“We turned it over too much, we couldn’t make a shot, we lost our defensive intensity; we weren’t getting back on defense and they were pushing the ball,” Earl explained. “The second quarter wasn’t very good.”

Emerging from the locker room for the second half, the Lady Spartans played at the high level of which they have become accustomed. Cavey found her groove from the floor, scoring 12 of her game-high 33 points in the third quarter as Berthoud took control of the game, blanking the Bison 20-0 in the period.

The Lady Spartans forced Machebeuf to miss 22 consecutive shot attempts as they pulled away in the game. Asked what adjustments Berthoud made to take control of the game in the second half, junior Sarah Howard explained.

“Percentage wise they’re not the best outside shooting team,” Howard said. “But inside they can kill us, so we wanted to keep them from getting inside. [Smith] just killed us in the second quarter. We just started playing defense, playing defense as a team and our offense just fell into place.”

The Lady Bison did not make their first field goal of the second half until just 3:24 remained in the fourth quarter, ending an unprecedented 35-0 scoring run from Berthoud. In addition to her 33 points, Cavey also grabbed 12 rebounds, second-best on the team to Fate’s 16, which represents a season-high for the senior power forward.

“I think we’re a really great defensive team right now, but we also have a great offense and now we’re starting to play well as a team,” Howard said. “I think it’s taken us a minute to get the whole team dynamic down but now that we have we’re really starting to click.”

Berthoud begins their Tri-Valley Conference schedule on Jan. 5 when they travel to Erie to take on the Lady Tigers. Skyline will then pay a visit to the BHS gym on Jan. 8.