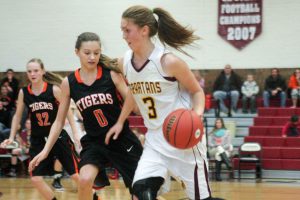 Berthoud’s Kristina Cavey (No. 3) was one reason for the Spartans’ victory on Tuesday at Berthoud High School. The game was Cavey’s first after sitting out nearly a
month due to a knee injury.
Angie Purdy / The Surveyor

It may have taken slightly longer than they would have preferred, but the Berthoud High School (BHS) girls basketball team looks to have finally found its groove – and it was not a moment too soon.

Serving as the host team in their Tri-Valley Conference season opener on Tuesday night at the BHS gym, the Lady Spartans hung 19 on the scoreboard in the fourth and final period to beat the visiting Erie Tigers by a 47-41 final.

Berthoud began the fourth period trailing by four, 32-28, but out-scored the Lady Tigers by 10 in the final frame. Asked how his team was able to stage the 19-9 fourth-period rally, Berthoud Head Coach Randy Earl said, “I think we started playing a little better defense, started rebounding a bit better, and we hit some shots.
“The free throws were really the difference there.”

The Lady Spartans shot an impressive 10-for-14 from the charity stripe in the final period. That mark was led by a seven-for-nine effort from junior Kristina Cavey, who was making just her second start of the season after having missed the previous eight games with a knee injury. Cavey explained that she is able to relax when at the free-throw line late in the game because, “It’s just about not putting myself under too much pressure and knowing that the team can recover, but if I hit these that would be great.”

Berthoud’s fourth-period rally came in a fast-and-furious manner. Cavey converted a three-point play at the 5:47 mark to knot the game at 32. Erie was able to re-take the lead, 34-32, but it was short-lived as junior Taylor Armitage grabbed a rebound, drove the length of the floor to sink a lay-up, draw a foul, and make the free throw to convert the three-point play and put the Lady Spartans ahead by one.

“We really started to work together and got back into the swing of things where we weren’t just rushing everything,” Cavey said. “We play our best game when we play good defense and we run our offense.”

On Berthoud’s next possession, Armitage was credited with an assist when she found Sarah Howard under the basket for a quick bucket to give Berthoud some breathing room 37-34. Howard, a sophomore, turned in another solid performance; scoring 10 points, pulling down five rebounds, and appearing more and more comfortable as a ball-handler.

Cavey, who led all scorers with 17 points, said it was “pretty fantastic” and “probably the highlight of my month,” to get a win in what was her first game back on the hardwood in over a month.

Both teams struggled throughout the contest to get into any sort of a rhythm. A trio of whistle-happy referees seemed to call fouls on virtually every possession, a total of 50 personal fouls were called in 32 minutes of basketball. Yet, to their credit, the officials were not favoring one team or another, whistling Berthoud 24 times and Erie 26.

The Lady Spartans took advantage, however, making good on 21 free-throw attempts to Erie’s 14.

While Berthoud was able to earn the spoils of victory, and there is no such thing in high school sports as a small conference win, Earl pinpoints a number of areas where his team needs to improve.

The Lady Spartans committed an astounding 13 turnovers in the first half Tuesday night and continue to get flummoxed when opposing teams employ a full-court press. Earl believes it is simply the young Lady Spartans’ lack of experience that causes some mental lapses and leads to turnovers.

“We’ve really got to settle down out there,” Earl said. “We’re worried about too many other things than just playing the game.”

Earl added that once the team worked out a few kinks, and likely knocked off some rust after a two-and-a-half week hiatus from competitive ball, everything came together and the team snatched victory from the jaws of defeat.

“We settled down and we played the way we can, and so it was better in the fourth quarter,” he said.