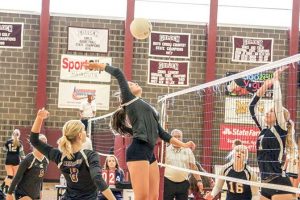 Berthoud’s Shay Pierick goes up for a kill against 5A opponents Loveland at the Golden Tournament at Golden High School in Golden on Oct. 29. Despite losing to Loveland, the Spartans improved to No. 8 in class 4A after winning three
of four matches over the weekend. The Spartans host Region 8 competition at Mountain View High School in Loveland starting Friday.
Paula Megenhardt / The Surveyor

With the regular season now complete, the Berthoud High School (BHS) volleyball team finds itself one step closer to the season goal of making a third-straight trip to state.

In the tournament’s decisive match, Berthoud pushed its neighbors to the north to the maximum number of three sets − after having earlier come up just short in an extended first − but lost, as Loveland was able to score three key points late in the set by attacking the middle of the lady Spartans defense. After a timeout, Loveland clinched the set- and match-winning 15th point on a well-executed tandem block.

Entering the Golden Tourney, the Spartans had already clinched a tie for first place in the Tri-Valley Conference (TVC) with Holy Family − with whom Berthoud split the teams’ two-game season series − all but assuring hosting rights for regionals. After their strong showing in Golden, Berthoud moved up from No. 11 in RPI to No. 8, providing a more favorable matchup for the upcoming regional tournament, but also setting up the possibility the Spartans will have to face top-ranked Lewis Palmer the following weekend in pool play at state.

Berthoud appears to be peaking just in time for the postseason and, in the words of head coach Daisha Agho, have smoothed out a few rough edges in their play.

“I’m very proud of this team who was able to show up with a much better and more refined defense this set of matches than we had been playing at the end of regular season,” Agho said. “It’s nice to see the girls transfer more of the things we have been working on in practice to games to be better prepared for the upcoming regional tournament.”

“Our passing has improved so much since the beginning of the season when we said that’s what was needed to work on, we’re really getting there,” Megenhardt said.

Megenhardt was named to the All-Tournament team in Golden and led Berthoud with 81 assists to go with seven aces and 23 digs.

The 2016 team has a core of seasoned players – including Megenhardt, Julie Ward, Shay Pierick and Sara Howard – who were part of Berthoud’s last two regional champion squads. The veteran presence has allowed the team to focus on fine-tuning rather than fundamentals, something Agho has stated on several occasions will hopefully pay dividends this time of year.

“I don’t need to worry about [fundamentals] with this group,” Agho said. “They get that and it lets us work on the other things, the little things, the things are going to get us to go farther.”

While the veteran presence has allowed Berthoud to hone-in on the finer points, the team has also been able to nearly-seamlessly integrate a group of four freshmen, all of whom contributed in big ways in the four games in Golden as well as throughout the season. Sophie Kathol contributed 27 digs, five aces and 18 kills in Golden, Teagan Holmes had five blocks and seven kills, Cas Berry led Berthoud with 37 digs and Trinity Penny had 19 digs to go with six aces.

As Holmes explained earlier in the season, the four have never been treated like rookies and that has allowed the group to fit in and contribute to a team that from day one has had designs on making a deep run at state.

“At the beginning of the season [coach] Agho made it very clear it didn’t matter what age we were or what grade we were in, we’re all their equal level,” Holmes said. “I just have to go out and play my best, we all have to pay our best, it doesn’t matter if we’re freshman or seniors.”

Berthoud hosts regionals on Fri., Nov. 4, but the games have been relocated to Mountain View High School in Loveland. The lady Spartans will attempt to win their third-consecutive regional title and make a trip to state against 17-seed Mountain View and 29-seed Glenwood Springs. The first match is set to begin at 2 p.m.