Lady Spartans overrule Commanders in opening round of State 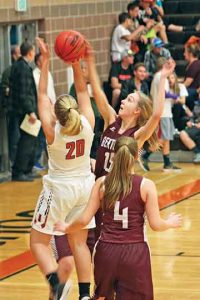 Berthoud’s Kyleigh Milan attempts a shot block against a Mead opponent in the final game of the regular season at Mead High School on Feb. 17. The lady Spartans won that contest and went on to win their state  tournament first-round contest against John F. Kennedy High School 55-40, Tuesday night.
Angie Purdy / The Surveyor

In postseason games, with high stakes and roughly evenly-matched teams, the side that emerges victorious is often the one that is able to capitalize on the mistakes of their opponents.

In winning their opening-round game of the 4A state playoffs, the Berthoud High School (BHS) girls basketball team took advantage of the 26 fouls committed by their hack-happy visitors from John F. Kennedy High School. Berthoud made good on a whopping 26 of 33 free-throw attempts, taking the game by a comfortable 55-40 final score.

“Just the way it worked out,” Berthoud head coach Randy Earl said when asked after the game about his team’s stellar effort from the charity stripe. “The way (Kennedy) plays defense, the way they whack at you enough, and we’ve been pretty good free-throw shooters all year.”

Superstar freshman Emily Cavey, who has stood out for her ability to attack the basket and draw contact all season long, made 15 of 18 from the line on her way to game-high 25 points, and seniors Sarah Howard and Maddie Decker each chipped in another four apiece.

“My club coach told me ‘take it one free-throw at a time … it’s the easiest shot out there, so you should make it,’ so I just kind of took that approach; I stay with my rhythm and I just put it up there,” Cavey said of her standout effort from the foul line in what was her first career playoff game.

Kennedy sophomore Sierra Bridgett drained a three-pointer with 2:32 left in the first quarter that gave the Lady Commanders their first, and last, lead of the game. A pair of free-throws from Cavey, a jumper from point guard Sydney Meis and a bank shot on an in-bounds pass by senior Kyleigh Milan with just six seconds left, put Berthoud ahead 13-9 at the end of the game’s opening eight minutes.

Cavey was a perfect eight-for-eight on free-throws in the second period, and added another four points from the floor in the frame, as the Lady Spartans slowly began to pull away in what was easily their most physical game of the year. Junior point guard Mikayla Marquez, Kennedy’s most dynamic player, scored seven in the period to keep the Lady Commanders in the game at the break, where Berthoud held a five-point lead, 27-22.

Berthoud made a pair of small adjustments at halftime, one on each end of the floor, which allowed the home team to pull away in the third period. The idea was to push the pace on the offensive end and clamp down inside on defense to prevent Marquez from attacking the basket. Both approaches worked relatively well as Berthoud out-scored the visiting Commanders 12-5 in the third to take control of the game.

“We wanted everybody to move in because all (Marquez) was doing was putting it on the floor and going to the basket,” Earl explained. “So we wanted everybody to move in and help on that and make them kick it out and shoot a three.” Kennedy made only four shots from the floor in the second half, their first coming with just five seconds left in the third and their last a bank-shot three-pointer from the corner with just over two minutes left and the game already in hand for Berthoud.

Meis found Howard twice and Milan once as Berthoud quickly assembled a 6-0 run to push their lead into double-digits in the opening three-plus minutes of the third. Howard, who scored 10 points and grabbed eight rebounds in what figures to be her last game on the BHS hardwood, credited Meis with setting her up for the pair of buckets to open the second half.

“That was all on Syd, her assists were amazing, I didn’t even see them 90 percent of the time, she really took initiative and helped out with assists there,” Howard said. “I know coming from that first half we were feeding off each other doing well … we came out with the mentality that we’ve got to keep pushing with this, if we want to go further in the playoffs we’ve got to keep going.” Howard was a perfect four-for-four from the line in the frame, helping the Lady Spartans take a 39-27 lead entering the final eight minutes.

Kennedy, to their credit, refused to go down without a fight and assembled a 5-0 run to the 6:07 mark in the fourth, cutting Berthoud’s lead to seven. A pair of free-throws from Decker and a trey from Meis quickly put the Lady Spartans back in command, 44-32, with just over five minutes remaining.

Berthoud shot over 50 percent from inside the arc on the night and avoided costly turnovers, the latter of which Earl attributed to Kennedy’s man-on-man defense and lack of a full-court press.

Cavey played exceptionally, leading the Lady Spartans in scoring and rebounding. It was something of a make-good game for the freshman who said, “Most of it I think for me was last game against Mead I didn’t have a good game and I kind of decided that I was going to step it up. But also I feel like our whole team was totally prepared for this game and everyone was so together and playing as a team and that really made a difference.”

The Lady Spartans travel down to Colorado Springs to take on No. 4-seed Air Academy (19-4, 12-2 conf.) on Friday, Feb. 24 for the second round of the state tournament.