Lady Spartans on to Broomfield for the postseason

They appear to be peaking at the right time. 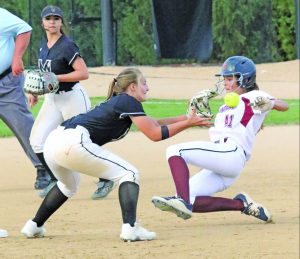 Photo by ACP Media – Berthoud’s Shaylee Spears slides into second just ahead of the tag in a game at BHS.

In their final week of the regular season, the Berthoud High softball team picked up a pair of wins – defeating Severance by a 3-2 final Tuesday and then handing Niwot a 10-0 defeat in the regular-season finale Thursday. Both contests were played on the road and the wins were critical not only from a seeding perspective for the upcoming regional tournament but also for the confidence boost they provided to a team that has only a few players with postseason experience.

“Yes, I think that we have gotten better every week, we’ve had our ups and downs along the way, but they’ve been minor, a little thing here, a little thing there that we’ve paid for, but the kids have rallied, they have worked hard and more and more positive things are happening,” said Berthoud Head Coach Buddy Kouns when asked if he feels his team is peaking at precisely the right time.

Against Severance, the Lady Spartans scratched out a run in the second inning and added two more in the fifth. Severance rallied, however, adding two runs in the home half of the seventh and final inning and threatening to win in walk-off fashion but Berthoud slammed the door to take the game by a 3-2 final.

In Thursday’s contest in Niwot, the story was not quite the same. Berthoud jumped out to a quick 5-0 lead in the second frame and kept building, adding four more runs in the third and a final run in the fifth. Ace pitcher Cemryn Pickett dominated the Niwot hitters; the sophomore allowed only a single hit and walked three on her way to the five-inning, mercy-rule shortened shutout.

Pickett’s stellar performance inside the circle cannot be overstated, both in how well she is pitching and how important it is to the team’s success.

As Kouns explained, “This game starts with what we do in the circle and we what we should all be happy with is that our pitcher is pitching better now than she was in game one, she is growing as a pitcher, she is locating her changeup, that’s the pitch she has to have, she’s getting more confident with it, I am pleased with where we are. She gave up just one hit today and against this team, this is a good hitting team.” Niwot scored 209 runs on the season, the third-most in the nine-team Longs Peak League and boasts a strong team batting average of .391.

Standout junior Gracie Flores, who recorded a double and triple in the contest with Niwot, accounting for two of Berthoud’s seven extra-base hits on the afternoon, agreed that everything seems to be coming together at the right time. “I think it’s everything, we really needed to come together and gut these wins out and I think that’s really what we did, ultimately we’re coming together in every aspect of the game,” Flores said. “Everyone is getting better, everyone is zoning in, everyone is jumping in with two feet. Everyone just building off each other, working together, it really helps when we’re playing for each other, and I think that’s what it takes to be a great team.”

The middle of the order shined brightly for Berthoud against Niwot. Cleanup hitter Sierra Pirkey went three-for-three with a triple, two runs scored and a stolen base. Shaylee Spears, batting fifth, reached base twice, once on a double, swiped a bag and crossed home plate twice. Six-hole hitter Lauren Zavednak scored two runs on two hits, as did fellow-senior Carly Fischer from the seventh spot in the order.

With regionals taking place this Saturday, the combination of stellar pitching from Pickett, a batting order that is red-hot and a team that has been largely been playing clean in the field will be critical if the Lady Spartans are to make a return to state.

Berthoud finished the regular season 14-9 overall, 5-3 in Longs Peak League play, a mark that was good enough to earn the No. 17 seed in Class 4A. On Saturday, Berthoud will travel to Broomfield where they will face off with former Tri-Valley Conference rival and No. 1 seed Holy Family, No. 16 Pueblo Central and No. 32 Denver North; the Lady Spartans will need to win two games to reach their season goal of qualifying for the state championship tournament at the Aurora Sports Park Oct. 22-23.