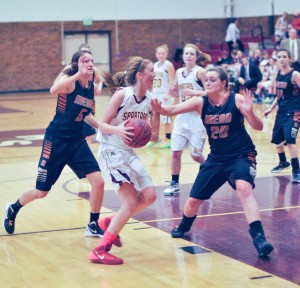 As is the case for just about every high school team at the start of a new season, the Berthoud High School girls’ basketball team will take to the court without two critical players to the team’s success in the previous three seasons. The pair − Kendall Baker and Sami Kouns − lost to graduation, were stalwart players, team leaders, and forces on both ends of the floor.

Yet the Lady Spartans are not worried and, to the player, fully expect not only to return to the postseason but to contend for the Tri-Valley Conference (TVC) crown they shared with Windsor last season.

The team’s confidence is not ill-founded as Berthoud returns a deep and talented roster comprised of players with a history of playing together that dates back to their elementary school years. Led by 2013-14 TVC Player of the Year, Kristina Cavey, and coached by Randy Earl, named 2013-14 TVC Coach of the Year, the Lady Spartans looked primed to make another deep run in the state playoffs.

“I think we’re clearly in the mix to be one of the top teams in the conference,” said Earl, who won his 300th career game last season.

Yet Earl conceded that replacing a pair of four-year letterman who comprised the Lady Spartans’ starting backcourt is no small task and said it is still a work in progress.

Berthoud’s team is centered around Cavey, a junior who led the Lady Spartans in scoring average (15.5 points per game), three-pointers (35) and rebounding (6.8 RPG), according to Max Preps, last year as a sophomore, and took home All-Conference honors in the process.

Cavey put in extra conditioning work, running double what her teammates did at practice last Wednesday because, in her words, “I need to be in shape. I figure the more work you put in the better the outcome.”

Despite being her team’s tallest player at 5’11”, Cavey did a fair amount of ball-handling work last season and, with the departures of Kouns and Baker, will be the Lady Spartans’ primary ball-handler to begin the season, according to Earl. It is a role Cavey embraces with a genuine team-first attitude.

“Whatever I can do to help the team,” Cavey said. “I’m not setting any personal expectations, it’s just about coming out and playing ball. In the end it’s all about the team.”

While Cavey, who Earl says “can really shoot it,” will spend a lot of her time on the perimeter, fellow-junior Taylor Armitage will resume her role as the Lady Spartans’ dominant force in the post. A physical presence down low, Armitage’s bubbly and affable demeanor mask the hardcore intensity with which she plays. The junior was second to Cavey last season in both scoring (267 points) and rebounding (145 rebounds) and led the Lady Spartans with a 46 percent shooting percentage, according to Max Preps.

Armitage embraces her role as a leader on the team.

“I think it comes with seniority,” Armitage said. “All the seniors and juniors before me really helped make me the player I am today, and that’s what I hope to do with these younger athletes out here.”

“I think we just need to keep working like we are now and good things will happen,” Armitage said. “I think this year is going to be fun and I think it’s going to be a real good one for us too.”

In addition to Cavey and Armitage, the Lady Spartans return senior Audrey Kouns, juniors Maria Fate, Sydney Kouns and Lindsay Ericson, all of whom played significant varsity minutes in the 2013-14 season.

The Lady Spartans will open their season on Dec. 1 with a trip to Keenesburg to face Weld Central. Berthoud will then host the annual Spartan Classic at BHS beginning on Dec. 12.