Lady Spartans give Wizards taste of their own magic 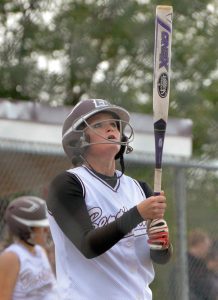 Berthoud’s Jessica Boruff steps up to the plate just prior to hitting her second home run of the game, Tuesday at Berthoud High School.
John Gardner / The Surveyor

In the world of sports there are wins and there are big wins. In besting Windsor by an 11-8 final on Tuesday afternoon at Bein Field, the Berthoud High School softball team got a big win. It was an important victory, against a fine Windsor squad, as the Lady Spartans work to elbow their way into the top eight of Class 4A that brings with it the right to host Regionals.

The manner in which Berthoud won the game–building a sizable lead, allowing their opponent to get back in the game before extending their advantage and ultimately emerging victorious–was a small bit of poetic justice for a Windsor squad that has notched five of their 10 wins in exactly such a fashion.

Six of Berthoud’s 11 runs were driven in by centerfielder and clean-up hitter Jessi Boruff. The lone senior on the Berthoud squad, Boruff turned in a trademark performance by blasting a pair of dingers and scoring twice in her final regular season home game.

“Today I just came to leave everything out on this field,” said Boruff. “It was a great win and we worked hard all week to get this win and we were very successful.”

Boruff was honored by her teammates, coaches, family and friends for her contributions as a four-year letterman and (soon to be two-time) All-Conference player.

Boruff’s first round-tripper, a moonshot that cleared the left field fence by such a long margin that Windsor outfielder Breanna Hamilton gave up chase, also brought home Taylor Armitage to give the Lady Spartans an early 2-0 lead.

Berthoud extended their lead to five-zip in the second inning when sophomore catcher Hannah Langer, who finished the game four-for-five with three runs and one RBI, laced a base hit allowing Larissa Royer and Lindsay Erickson to cross home plate. Langer came around to score when freshman Delany Fouts reached base on a Windsor error.

Boruff’s second homerun, that scored Langer and Armitage, pushed Berthoud’s lead to 8-1 in the bottom of the fourth.

The Lady Wizards proved resilient, however, as they cut Berthoud’s lead to 8-7 with a six-run fifth. Royer, who had once again pitched brilliantly for Berthoud, suddenly found herself in a bases-loaded, no-outs jam with two runs already across the plate and was replaced in the circle by Armitage.

“We’ve had a couple of those innings where we just lose sight of getting our outs and making the small plays, we need to do a better job of backing up our pitchers,” said Berthoud Head Coach Ashitin Williamson.

Only five of the eight runs Berthoud surrendered on the day were earned, as the home team committed four fielding errors.

Despite affording Windsor some life in the top of the fifth, the Lady Spartans responded in the bottom half of the frame. Singles from Langer and Armitage sandwiched Fouts’ patience in working a walk. All three came home via a Boruff sacrifice and a single from Madi Herbert as Berthoud extended its lead to 11-8.

Protecting a three-run lead, Armitage sent six straight Windsor batters back to the dugout in her final two innings inside the circle to finish the win for Berthoud. “Just knowing I have a great team behind my back,” said Armitage when asked after the game about how she felt about her six-up, six-down save.

“Larissa really did take care of the first half of the game, you really have to give her props, we have a good pitching duo.”

The win against Windsor was critically important as the Lady Spartans lost their Sept. 25 game to class 4A No. 1 and undefeated Frederick. Despite Madison Herbert hitting her TVC-leading fifth homer and driving in a pair, the six errors committed by Berthoud proved to be the difference in the game. Led by pitcher Alicia Hernandez, who notched her 17th win on the year, the Lady Warriors improved to 18-0 on the season.

The Lady Spartans (12-6, 6-5) will travel to Broomfield for their regular season finale this afternoon for a matchup with the Lady Tigers (7-10, 4-7) of Holy Family. The CHSAA Seeding Committee Meeting will be held on Sunday, Oct. 5 to choose the qualifiers and set the matchups for Regionals, which will be played on Saturday, Oct. 11. Thirty two of the 67 teams in class 4A will qualify for Regionals; 19 automatic qualifiers (including two from the TVC) and 13 at-large teams will battle for a right to compete the state tournament.