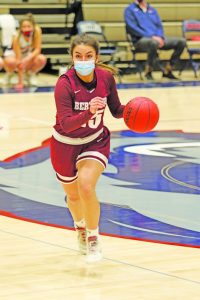 Photo by Angie Purdy – Berthoud’s Martha Rennaker races past half court in last week’s game at Northridge. Rennaker and the Lady Spartans have won five-straight games and now hold first place the 4A Longs Peak League.

One mark of a great coach is their ability to adapt their approach to the game to what their collective set of players do best. This is particularly true in high school sports as the makeup of the team changes significantly year-to-year, season-to-season.

Alan Gibson, adaptability is at the center of his and his staff’s approach to the game. Over their last two games, both victories – 58-44 over Northridge on Feb. 11 and 59-33 over Mountain View on Tuesday night at home – Berthoud began incorporating more man to man defense in their game plans. The results speak for themselves and Lady Spartans have extended their win streak to five games and now hold sole possession of first place in the 4A Longs Peak League.

“We haven’t spent a tremendous amount of time on man to man defense but these last two nights these girls have proven that they can do it and that they enjoy it so that will probably start creeping in a lot more,” Gibson said. “This group just really thrives at that aspect of defense and so we need to roll with it.”

In Thursday’s game in Greeley, the hosts got off to a fast start, forcing five Berthoud turnovers and taking a 12-3 lead less than three minutes into the contest. The Lady Spartans responded, however, and it was their most experienced players doing the damage.

Seniors Bre Fowler and Martha Rennaker combined for two three-pointers and junior Ally Padilla, who has playing at an exceptionally high level over the last month, scored six as Berthoud caught fire on offense. Padilla drained a three-pointer from the corner as time expired in the first half to give the Lady Spartans a 25-21 lead going into the halftime break.

“It’s a testament to these girls, they never believe ‘tonight isn’t our night’ and the way they responded and came back to get us the lead, I think we limited them to just five points in the second quarter,” Gibson explained after the game.

Berthoud took command on both ends of the floor and slowly but steadily extended their lead. Fowler and Padilla each hit shots from downtown in a third quarter that saw the team’s man-to-man defense stymie Northridge, who made good on only two shots from the floor in the third quarter.

Rennaker scored seven in the fourth quarter, Fowler added five and Padilla also scored seven to finish the night with 21 points and 13 rebounds, her third double-double in as many games.

With the experience from the Northridge game and a few days of practice under their belts, Berthoud’s man-to-man defense reached a new level of effectiveness in Tuesday night’s win over Mountain View. The Lady Spartans did not allow their guests to score their first points until the 6:21 mark in the second quarter, by which time they had built an 18-2 lead. The Lady Lions were able to get another bucket in the quarter but Berthoud held a commanding 22-4 lead at the break.

Berthoud cruised in the second half and while they let off on the gas a little bit, and Mountain View kept playing hard, the outcome of the contest was never in doubt. Fowler swiped a steal with 3:49 left in the game and went coast-to-coast, her lay-up on the home end of the floor gave Berthoud a 50-21 lead. Padilla and Fowler each scored 21 points on the night to lead Berthoud while Fowler also contributed team highs in rebounds (nine), assists (seven) and steals (six).

While the team and her family were aware of the milestone to come, she did not. Early in the second quarter of Tuesday night’s game against Mountain View, senior Bre Fowler swished a free-throw to score her 1,000th point of her BHS career. The smattering of fans who were able to attend took a minute to give the senior point guard a standing ovation and some audible cheers.

“It’s awesome, I didn’t even see it coming I just thought everyone was cheering because I made the free-throw,” Fowler said. “I knew I was a couple points off but I was just focused on the winning the game.” Following the game, the team took a few minutes to present Fowler with a hand-made sign commemorating the 1,000-point milestone and snap some pictures with her coaches and teammates.

Gibson had high praise for Fowler, who has been a central part of Berthoud program throughout the coach’s wildly successful tenure and pointed out how she is a complete player who shines in all aspects of the game.

Said Gibson, “It’s a great, great accomplishment to score 1,000 points but I think what’s even more impressive is, not only is she a scorer but right now she second in the state in assists, she’s in the top-15 in steals, so yes, she’s been a greater scorer and she’s meant so much to our program in that capacity but you can also tell she’s very humble, it says a lot about her character, about the way that she is a team-first program and we are so glad she’s been a part of us for the last four years.”

Berthoud (6-1) will have a chance to get revenge on Severance (5-2), who handed the Lady Spartans their lone defeat of the season on Jan. 29, when they travel out east to take on the Silver Knights this Thursday at 5 p.m.