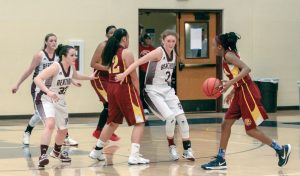 In the playoffs, every possession counts. In their first-round state playoff game against Colorado Springs-based Sierra High School, the Berthoud High School girls basketball team had to hold on until the very last possession of the game to get the win.

Playing at posh Valor Christian High School in Highlands Ranch, Berthoud topped Sierra 56-54 on Friday, Feb. 26. The following evening, Berthoud fell to host team and No. 1-seed Valor by an unceremonious 68-36 final that ended their season.

As senior Kristina Cavey explained after the game, Berthoud came in knowing they had to mitigate Sierra’s ability to attack the basket and score points in the paint.

“We knew that they were very athletic, probably more athletic than us, so we were going to take away their drives, stop them driving because we saw on the tape that’s what they do.”

Thanks to a red-hot start to the game by senior center Taylor Armitage, who scored eight points and grabbed five rebounds in the first quarter, Berthoud held a 17-15 lead after one.

“I just played high-intensity, the whole team came together, we said it wasn’t going to be the end of our season. I just kept thinking to myself ‘don’t let this be the last game,’” Armitage explained.

The two traded baskets and leads throughout the first half. A steal and lay-up from Cavey put the Lady Spartans up 21-20 at the 4:49 mark in the second. A rebound and put-back from Maria Fate knotted the score at 23 with 2:30 left before halftime and a trey from Cavey in the final seconds put Berthoud up 28-25 at the break.

Berthoud stuck to their game plan in the second half, playing tight defense and running their offense. “We felt like if we made them play defense that we would be okay,” Berthoud Head Coach Randy Earl said. “We wanted to pass the ball and run our offense because when we did, we got open shots, they didn’t stay with us.”

Seven points from Cavey helped give Berthoud some breathing room, 41-36, entering the final period. Yet, Sierra battled back and took the lead, 50-48 with just 3:18 left in the game. A pair of lay-ups from Cavey, who scored 10 of her game-high 26 points in the fourth quarter, and a jumper from Sarah Howard put Berthoud ahead 56-54 with just 10 seconds left and Sierra in possession of the ball.

“We were guessing that [Sierra senior Kanecia Cooks] was going to get the ball,” Earl said he told his team during the timeout before the final possession. “We said if [Cooks] got it make sure we go cover down, go cover her and double her because we didn’t think there’d be enough time on the clock for her to kick it back out.”

Instead, Sierra attempted to win the game on the final shot, kicking the ball out to the corner for a three. The attempt bounced off the rim and was grabbed by Fate, who held on as the final seconds ticked off the clock.

“I was shocked by that,” Cavey said of Sierra’s decision to shoot the three. “We were preparing for them to go to [Cooks] but we talked in the huddle and we knew to be ready for that kick-out.”

“It’s been such an honor being able to play with these girls,” Cavey said. “I think we all really wanted to win this for each other and win this for our school. That’s special and it feels great.”

While Berthoud battled Valor to an 11-11 tie after the first quarter, the Lady Eagles pulled away in the second and third, out-scoring Berthoud 40-15 to take command of the game and end the Lady Spartans’ season in the Sweet 16. Cavey and Armitage contributed 15 and 14 points, respectively, in the final game of their high-school basketball careers.

Despite having it end earlier than they had hoped, by any measure the Lady Spartans had a successful season. Berthoud (20-5, 11-3 conf.) finished in third place in the ultra-tough Tri-Valley Conference (TVC) and reaching the Sweet 16 marked the team’s deepest run in the state playoffs since the 2006-07 season.

Cavey capped off one of the best basketball careers in Berthoud history with a stellar senior season that figures to garner her TVC Player of Year honors. Cavey won the TVC scoring title with a 26.3 points-per-game average, good enough for second in all of Class 4A. Cavey also paced the Lady Spartans in rebounding (6.4 rebounds per game), steals (2.6 steals per game) and blocks (18).

“I am so blessed to have been on the court with these girls,” Armitage said. “I’m not going to play basketball again … but to do it this year with these girls really meant a lot.”