Lady Spartans back to winning ways 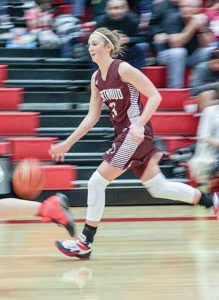 Berthoud freshman Emily Cavey led the Spartans to victory with a double-double (16 points, 12 rebound) against Roosevelt, and scored 23 points and 9
boards against Frederick.
Angie Purdy / The Surveyor

One week ago, the Berthoud High School girls basketball team found themselves in the unfamiliar positon of having dropped back-to-back conference games.

Yet, the skid ended there as the Lady Spartans notched consecutive Tri-Valley Conference (TVC) road wins by topping Roosevelt 51-36 on Jan. 13 and then besting Frederick 56-37 on Tuesday.

Standout freshman Emily Cavey led the way for Berthoud in both games, recording a double-double with 16 points and 12 rebounds against Roosevelt and then pouring in 23 points to go with nine boards in the 19-point win over Frederick.

“Yeah, she can play, she’s a good player,” Berthoud Head Coach Randy Earl said of Cavey, who is currently the second in the TVC in scoring average. “The good thing about this team is we can really rotate people more than we’ve been able to in the past, and everyone comes in and does something, plays good defense or gets some rebounds. Everyone does their part.”

In the two-game losing streak, Berthoud was plagued by turnovers and were frequently impatient on the offensive end, problems the team made a conscious effort to rectify to get back on track. The Lady Spartans cut their turnovers down from 49 combined in the two losses to just 19 in the pair of wins and exhibited much-improved ball movement on offense.

Berthoud set the tone early against Roosevelt, running their offense efficiently to get players open for shot attempts. Sophomore point guard Sydney Meis drained three from downtown for the Lady Spartans in the opening period. After allowing Roosevelt to hang 14 on the board in the opening frame, Berthoud’s defense clamped down. Roosevelt did not score their first points of the period until the 3:08 mark, while Berthoud assembled a 10-2 scoring run on buckets from Cavey, Kyleigh Milan and Caisey Ellis to take a 27-18 lead into the locker room at halftime.

“We all decided we’re just done having the turnovers that we’ve had, we really need to focus on that and we worked on it in practice and I think it all got into our heads about where we made our passes and I feel like tonight’s game we executed that well,” Cavey explained. “The ball movement we had as a team was really, really good, and the fact that we ran through our plays and didn’t rush ourselves.”

Berthoud’s offense stayed hot coming out of the break. A 10-0 run, with senior Morgan Schachterle pouring in six points and Meis the other four, put the game out of reach of the hosts. The Lady Spartans doubled-up the Lady ‘Riders 12-6 in the third to take a commanding 39-24 lead into the final eight minutes.

While Berthoud’s offense might not have been quite as efficient as it was in the win over Roosevelt, the Lady Spartans shot just 31 percent from the floor, 17 points from the charity stripe carried the day in the win over Frederick. Cavey’s game-high 23 points included a stellar 13-of-16 effort from the free-throw line, Milan added another 10, Meis contributed nine, and Sarah Howard eight while Schachterle grabbed a team-high 10 rebounds.