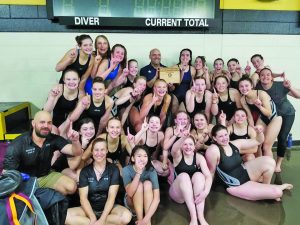 It wasn’t a miracle by any means, as it was so well-earned, but it sure makes for a great story.

In their first year of existence, the Berthoud High School (BHS) girls swimming and diving team won the Tri-Valley Conference (TVC) title, going away last Saturday at the Dick Hewson Aquatic Center at Thompson Valley in Loveland. Berthoud accumulated 390 team points, well ahead of second-place Eaton’s 226, in the six-team conference meet and will be sending a broad swath of their roster to the 3A state meet this weekend.

Berthoud won eight of the 12 events contested at the TVC championships, including all three relay races. Jamie Dellwardt won a pair of conference titles, taking first in the 100-yard backstroke and 200-yard individual medley, while teammate Abby Dodd also took home two, winning the crown in the 50-yard and 500-yard freestyle races and Sarah McCormick won the one-meter diving competition.

Winning the conference title was not something Berthoud expected when they began the season, but, as McCormick explained, the team grew more and more confident with each win they posted throughout the season.

“At the beginning of the season we didn’t think we would be (conference champs) but we had an idea when we went to the first meet in Estes and we won. And then we kept winning and winning and winning, so when we went to conference everyone expected us to win and we did and it felt really good,” McCormick said. The junior scored 365.95 points in the diving event, winning the conference title with a score that will place her at No. 14 in the 26-competitor field at the 3A state finals.

McCormick began swimming in middle school and, as she explained, her background in gymnastics gave her a leg-up in learning the complex twists and spins required for competitive diving. “I was a gymnast for eight years, and I kind of strayed away from that, but then I was swimming for Walt Clark in seventh grade and I saw divers and thought ‘hey that’s kind of cool’ and I wanted to try it out and I ended up loving it,” the Berthoud junior said. “(Gymnastics) helps a lot because being able to know how to twist and how to pull a dive really helps.”

Dellwardt has been sensational all season long and thus it came as no surprise to see the sophomore take home a pair of individual crowns and contribute mightily to Berthoud’s first-place finishes in the 200-yard medley and 400-yard freestyle relay races. Dellwardt, joined by Kysa Keck, Macy Fitzgerald and Arika Beard posted a time of 2:01.49 in the medley relay to win by nearly a full second in front of the runners-up from Holyoke. In the 200 free relay it was Dellwardt, Dodd, Keck and Hannah Roberts posting a championship time of 1:49.58 in the finals, nearly three seconds better than the state-qualifying time they posted the day prior in the preliminaries.

Dellwardt shined in her individual races as well; her time of 1:00.34 in the finals of the 100-yard backstroke event gives her the No. 2 rank at the upcoming state finals and a top-five spot in the 200-yard individual medley, where she posted a 2:16.67 in the TVC finals.

Dodd also won two events of her own, taking first place in the freestyle sprint race and the freestyle endurance race. The sophomore, who has been swimming competitively since middle school, explained having her teammates in the races helped push her to the crown in both races.

“I was racing three of my teammates in the 500 and all of our times were super close, so I knew it was going to be a super close race,” Dodd said. “I’d been wanting to break six minutes all season and to have them there to push me and finally break six minutes and drop that much time, I was so excited!” Dodd won the 500-yard free in 5:53.68, considerably faster than her goal of six minutes. She also posted a time of 26.19 in the sprint race, securing the No. 14 spot at state.

Historically most Berthoud swimmers have competed for Thompson Valley, but all season long the team has spoken of how special it is for them to finally be wearing their school colors.

“When we won it was honestly such a great feeling, everyone was so excited and that last relay we really pulled together and dropped time in a way we hadn’t expected,” Dodd said. “Wearing our colors was pretty cool … it was cool to get recognized as Berthoud and win as Berthoud and not as Thompson. That was just a great feeling.”

Those sentiments were shared by McCormick as well, who explained, “I think it’s really cool because we’re finally wearing our school colors, so it’s a big deal to be wearing maroon and black. To be a first-year team and qualifying for state at the very last meet for the first time is a very big deal.”

The 2019 3A state swimming and diving championships will be held this Friday and Saturday at EPIC in Fort Collins.