Since taking over the boys and girls golf programs at Berthoud High School, coaches David Hunn and John Perry have said the goal is to make Berthoud a school known for golf. The trend lines have been terrific and this spring the ladies team has designs on making another trip to the 3A state championship tournament. 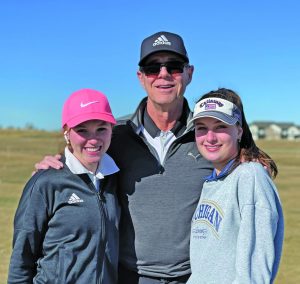 Photo by Dan Karpiel – Berthoud High girls golfers Anya Knoll (left) and Ashley Russell with Coach John Perry at TPC Colorado during practice on Monday afternoon. Both Knoll and Russell were state qualifiers last season and have their sights set on making a return trip to state this spring.

“We’ve got a really good group of girls, they’re very enthusiastic about the sport, this is going to be a big year,” said Perry. “I think we’re going to take a team to state, I think we will have at least three qualify but I think we can send the team not just two or three individuals.”

The team is led by two juniors, Anya Knoll and Ashley Russell, both of whom earned trips to state last year as sophomores. Knoll, the team’s top player, finished in third place with a round of 100 at the Estes Park 18 course last year at regionals but has her sights set even higher.

“I had a great season last year but I would like to have my season average to be lower this year, shoot in the 90s or even 80s, maybe that’s a stretch,” Knoll said with a chuckle. “I’ve been working hard on my clubhead speed with my driver and working on chipping and play around the greens.”

Perry thinks Knoll is a virtual lock for state and said that he believes his star junior can earn a top-10 finish this spring. With Berthoud serving as the host for regionals, which will be played this year at Mariana Butte in Loveland – a course the team knows well – the Lady Spartans will have that built-in advantage come the make-or-break regional tourney in May. “Anya is swinging the club really well, if her putting and her short game keep up with her full swing, she will be one of the top players, I think she has the potential for a top-10 finish at state,” Perry said.

Russell earned her trip to state last year as the final qualifier out of the region, carding a 120 that earned her 14th place. Like Knoll, her goal is to make a more emphatic entrance to state. “I don’t want to just slip in to state this year, I want to get into the top-10 (at regionals) and make it to state more easily, that would be amazing for me,” said Russell, who has been working hard over the offseason, practicing frequently and honing her swing at the Golf Dynamics facility in Loveland.

“It’s been a lot of me working at golf dynamics in Loveland, I’ve been trying to get in there at least once a week, focus on my swing mechanics, work on being more consistent,” she said.

In addition to Knoll and Russell, sophomore Brooklyn Tychsen, who missed qualifying for state last season the slimmest of margins, has also honed her skills and Perry believes is another player who will open eyes this year and has a fantastic chances at making state.

While Perry and Hunn have stressed the importance of swing mechanics, course management and, especially, short game, the pair have also worked with the team on the mental side of the game. Both Knoll and Russell mentioned that while they set goals of returning to state, they just want to have fun and enjoy each round they play.

The Lady Spartans will tee it up for their first tournament of the year on Monday at Valley Country Club in Aurora.