For the past five years Kelly Dunkelberger and her team of volunteers have baked, decorated and delivered hundreds of cupcakes to local businesses to raise suicide awareness in Berthoud, and the effort is only continuing to grow. 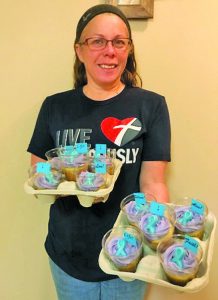 Kelly Dunkelberger shows off some of the cupcakes that have been made to distribute to businesses in Berthoud for suicide prevention awareness.

“This is a sweet reminder to think about all those out there who really don’t know how to voice their deep-seated emotions that there’s no way out,” said Dunkelberger of the Kelsey’s Cupcakes initiative, she began. “The goal is to raise awareness about suicide, to try to teach people to listen a little harder.”

The Berthoud resident originally started baking cupcakes and delivering them to businesses on Mountain Avenue in honor of the memory of Kelsey Falasco, who took her own life in December 2011. Falasco dated Dunkelberger’s son until he passed away from cancer in October 2011.

After the losses of A.J. Black and Joshua Francis to suicide in subsequent years, Dunkelberger’s cupcake initiative expanded to honor the memories of all three Berthoud High School students.

“The thought of a child, even a young adult, committing suicide breaks my heart, because they have everything to live for,” said Dunkelberger. “It just leaves their family wondering what more they could’ve done.”

For Dunkelberger, the holidays are an especially important time to raise awareness.

“This is just a tough time of year for me personally,” she said. “Especially around holidays, it’s important to listen to the subtle hints. Sometimes people see everyone else happy and they’re just not happy. We deliver the cupcakes as a silent reminder to take care of those you love.”

What started out with a woman on a mission and 200 cupcakes has only grown over the years, and this Dec. 14 Dunkelberger expects to deliver nearly 1000 cupcakes, with the help of about 20 local volunteers.

She’ll also have the help of local business Da Bean, which is donating carriers for the cupcakes, and local non-profit Let’s PLANet Giving, which is raising money to back her effort.

“Before this it was always out of my pocket, which I don’t mind,” said Dunkelberger. “But things get tougher every year, especially with adding more cupcakes each year.”

Anyone interested in making a monetary donation to help fund the initiative can donate online at www.letsplanetgiving.org, and those interested in volunteering to decorate and deliver cupcakes can reach Dunkelberger at 970-290-0596. Dunkelberger’s goal this year is to deliver five cupcakes per business to all commercial locations on Mountain Avenue and Second Street.

While all help is appreciated, Dunkelberger said, what’s needed most is a greater awareness.

“Any donation to any suicide awareness group out there helps” she said. “But the goal is really just to raise awareness to help prevent this senseless death. Especially this time of year, the world can use a little more giving, more openness and more respect.”