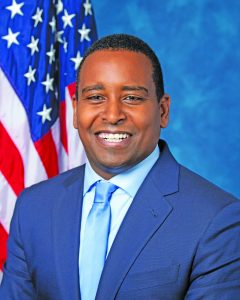 Neguse is seeking reelection this November and facing Dr. Charlie Winn, a Republican from Boulder County. In 2018, Neguse, who formerly served on University of Colorado Board of Regents and in the cabinet of former-Governor John Hickenlooper (D) as the Executive Director of the Colorado Department of Regulatory Agencies, was elected to the House by a sizable margin, capturing just over 60% of the vote.

While Neguse won handily in 2018, he does not see his reelection as a fete-accompli, saying, “We never take anything for granted, it’ is an honor and has been an honor to serve the community and look for common sense solutions and it would be an honor to have that again. We’re trying to make a positive case and I’m hopeful the people of our community will see the work I have done.”

Speaking with the Surveyor by phone on Tuesday afternoon, Neguse said the last two years have been a whirlwind but also two of most rewarding years of his life, both personally and professionally. Just prior to winning his seat, Neguse became a father and, once seated in the House, was granted prestigious assignments on the House Judiciary and National Resource Committees as well as on the Select Committee on the Climate Crisis.

Over the course of his first term, Neguse introduced more legislation (51 bills in total) than any other freshman member of the U.S. House, with five of those bills being signed into law by President Donald Trump, the most of any Colorado representative.

Neguse, while his policy positions are mostly in-line with the majority of his party, explained that he has worked hard across party lines, saying, “I firmly believe that no one party has a monopoly on good ideas and throughout my service I have tried to bridge the partisan divide.” Neguse was named as the most bipartisan member of Colorado’s congressional delegation.

“I am most proud of us is working together, our office has been very active and we’ve led locally at every turn,” Neguse said, stating that being engaged has helped him develop an understanding of his constituents’ priorities, something he promised to do if elected.

He continued, “We’ve been engaged in the community, we’ve worked really hard to have a representative of the entire community, I spend a great deal of my team listening to folks, we’ve held a record number of town halls, including service town halls that untie people of different political persuasions to serve in their democracy.”

While Neguse admitted that it is impossible to predict what the future holds, if he is fortunate to be reelected, his top priorities as the 117th Congress gets to work in January will be continuing to work on further economic relief and reducing the effects of the COVID-19 pandemic through the investment in therapeutics.

Beyond that, Neguse made mention of continuing his fight against the climate crisis, working to further protect public lands in Colorado and working to assure federal investment in infrastructure needs in Northern Colorado, saying, “It’s very important for us at the federal level to provide sufficient resources to address those challenges,” identifying the work currently underway and planned for I-25 expansion. Neguse said that regardless of the results of the presidential election and the markup of Congress, that Washington needs to, “rise to the occasion and continue to support measures to assist local businesses and working families.”

“Our county, our state has been through quite a lot. It has been critically important that we have a rep who engaged directly with our local leaders and the challenges we face locally are ones we can overcome together,” Neguse said, highlighting the efforts he has made with local leaders, including mayors, state, county, university and school district officials, to provide what Washington can to address local needs.

Said Neguse, “In this time of deep political divisions, at a time when politics has become so toxic, I would just encourage folks not to lose faith and not lose hope. We are up to the task to meet these really complex challenges. The only way for us to overcome those challenges is do what Coloradoans do best – working together across our differences. I will be honored to represent everyone in our distinct regardless of their political affiliation.”