Jets, outflows and explosions: Star and planet formation in Orion 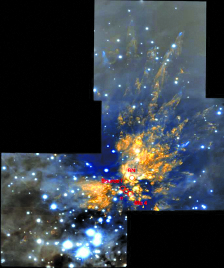 Courtesy photo – A near-infrared view of the Orion explosion showing shock-waves traced by singly-ionized iron and hot molecular hydrogen. The Trapezium stars which light-up the Orion Nebula are located near the bottom.

Public Star Night will be held on Friday, Feb. 15 at 7 p.m. The speaker will be Professor John Bally from the CU Boulder, ([email protected]). New observations with ALMA, CARMA, adaptive optics, and space-based observatories are changing our understanding of star and planet formation. He will use multi-spectral images to zoom-in from the visual view of the winter sky into the infrared to radio views of the star-forming cloud located immediately behind the Orion Nebula. About 550 years ago, a compact group of massive stars forming in this cloud experienced a violent explosion that released
more energy than the Sun puts out in 10 million years (Given the ~1300 year light travel time to Orion, the event actually occurred in AD 175±25 when Marcus Aurelius was emperor of Rome). The explosion was triggered by a collision during a close-encounter of at least four stars. The 15 Solar mass merger- remnant (“I” in the Figure) and two other stars (“x”, and “BN”) were ejected with speeds of 10 to 55 km s-1 (arrows in the attached Figure). The event flung-out 5 to 10 Solar-masses of gas, traced by carbon monoxide and other molecules, with speeds up to 400 km s-1. As this ejecta rams surrounding gas, it powers shock waves seen in the near-infrared. Such interactions may be common in star-forming regions, play a major role in determining the final masses of stars, and limit the sizes of their planet- forming disks. John Bally did his undergraduate studies at the University of California at Berkeley, and obtained his PhD at the University of Massachusetts at Amherst, earning his PhD in millimeter- wave radio astronomy in 1980. He joined AT&T Bell Laboratories for 11 years as a member of technical staff, working in the Radio Physics Research Department at Crawford Hill in Holmdel, N.J. in the group that discovered the Cosmic Microwave Background. He studied interstellar molecular clouds, the outflows and jets produced by forming stars, built sensitive mm-wave receivers, and worked on high-bandwidth, free-space optical communications, and atmospheric propagation characteristics. He participated in several expeditions to the South Pole in Antarctica to set-up the first permanent astronomical observatory there. Since 1991, he has been a professor of astrophysics in the Department of Astrophysical and Planetary Sciences at the University of Colorado, Boulder. He uses many of the world’s major observatories such as the Hubble, the facilities of the National Optical Astronomy Observatories and the Atacama Large Millimeter Array (ALMA) which is the most ambitious ground-based telescope ever built. His research includes the formation of stars and planetary systems, and the study of the dense, dusty, gas clouds currently forming clusters of stars. He studies the extreme conditions in the Central Molecular Zone of the Milky Way which hosts a four-million solar mass super-massive black hole. Recently, he has concentrated on massive stars, investigating their violent birth and demise. He participated in the observations of a recent neutron-star merger, and has been investigating explosive outflows formed by stellar collisions in dense clusters such as the event that occurred behind the Orion Nebula ~550 years ago (that’s when the signal would have reached Earth). He has re-kindled his interests in cosmology and is exploring the hypothesis of “cosmic natural selection” in which black holes produce universes. John Bally is an avid skier, and owns a home in Breckenridge, Colo., where he operates a small observatory used to take deep wide-field images.
Weather permitting after the presentation, visitors will be invited to look through the large telescope at various celestial objects. Public star nights are held the third Friday of each month, except July, when we are closed for annual maintenance. If you have any questions, please call the observatory informationline at 970-613-7793 or check the LTO website at www.starkids.org/.