She’s your neighbor, and did you know Janet Brown does silent discos at assisted living and memory care facilities, or at least before the COVID-19 pandemic?

Brown, an independent occupational therapy assistant and certified dementia care practitioner, will start bringing music and props to facilities when they open up again as a way to encourage the residents to get moving. She still offers more structured movement and music groups, since those are still allowed.

“We do exercise because we’re moving and dancing, but it’s not as structured as the music and movement group,” said Brown, who doesn’t have a business name for her offerings but does it as an individual.

Silent disco involves residents sitting in chairs and putting on headphones as they listen to music, encouraged to “dance” while seated. They also can get up and dance if they are able.

Brown, who moved to Berthoud last year, offered silent disco at facilities in Wheat Ridge, Arvada and Lakewood—she hopes to offer them again closer to home in Northern Colorado.

Brown brings boas and “funny glasses and hats” to encourage the residents to dress up—but since she’s bringing things from outside that need to be sanitized, most facilities have put a pause on the activity. 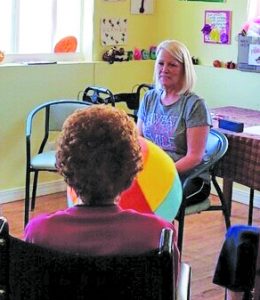 “I decided to hold off until things open up more,” Brown said.

Silent disco is more spontaneous and open than the music and movement groups, which follow a structured routine.

“I remove the word ‘exercise’ just because I get a more positive response,” Brown said, adding that she often gets a “no thank you” if she calls what she’s doing exercise and not movement.

With the music and movement groups, residents do seated dance and exercise routines that are easy to follow while also being energetic. Brown incorporates cognitive activities, such as Guess This Celebrity, where she shows a photo of a famous person, and Finish the Phrase for famous sayings and nursery rhymes.

“People get really into it and get competitive about it,” Brown said. “There’s a lot of laughter. It’s very engaging.”

Brown offers her music and movement groups at memory care facilities in the Denver area but, again, would like to move her offerings closer to home—she has one client so far in Loveland. She also provides private caregiving and respite services. For private caregiving, she goes to the homes of her clients for personal care and light housekeeping duties.

“I do a lot of engaging activities with folks,” Brown said. “I help with strategies to manage dementia and behavioral issues … and how to modify the environment for the person.”

Brown would like to offer more respite care, so that other caregivers can get a break. Respite care can be expensive and currently is facing a shortage in provider numbers, she said.

Caregiving follows a set schedule, while respite care is on an as-needed basis, she said.

“It’s more like companionship care,” Brown said. “When people need a break, I would be able to help them for a shorter period of time. … In one role, I’m the caregiver; in the other role, I’m helping the caregiver.”

That break is important considering the stress of providing 24-7 care without relief, she said.

“If somebody wanted to get a break, I’d like to help them figure that out and come to their rescue,” Brown said.

Brown particularly likes working with clients who have dementia. She quoted a few statistics, including that 6 million Americans have dementia and 15 million people provide them with care who are mostly unpaid family members.

“Being with somebody with dementia is a very difficult job for anybody, watching your loved one slip away,” Brown said.

“I was always drawn to individuals with dementia,” Brown said, adding that after seeing her grandfather experience Alzheimer’s, she’s gained a great deal of empathy. “I feel like I’m a dementia whisperer. Throughout my health care career, I’d be the go-to person. If they can’t get somebody to participate in therapy … I had some techniques. … It’s how you approach somebody and how you break up things into smaller pieces so they can follow along easier.”

Brown likes helping people remain as independent as they can, she said.

“I love just helping people figure out how to remain independent or become more independent, especially helping people stay at home,” Brown said. “If you go into assisted living, you really just have a room and everybody does things for you. I think it makes people happier and healthier to stay at home as long as they can.”