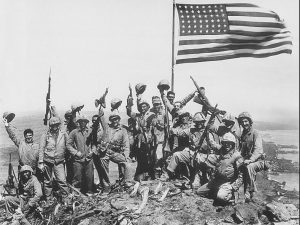 Courtesy photo – U.S. Marine Corps retired Sgt. John “Jack” Thurman is one of 17 men photographed in Joseph Rosenthal’s Gung Ho photograph, depicting the raising of the American flag at Mount Suribachi in Japan during World War II. He will give a talk about his experiences May 7 at the Berthoud Community Center.

World War II veteran Sgt. John “Jack” Thurman wears a red baseball cap with Iwo Jima Survivor printed on it and a leather jacket decorated by his daughter with patches and an imprint of his six medals.

Jack’s clothing is his memorabilia — he and his daughter, retired U.S. Navy Cmdr. Karen Thurman, donated his photos, uniform, paperwork, dog tags, weapons and medals in 2017 to the National Museum of the Marine Corps in Triangle, Va., to share his impact on history. One of the medals is the Bronze Star. 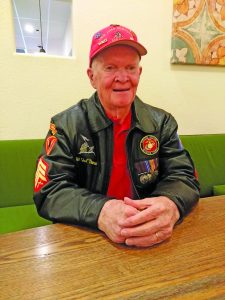 Photo by Shelley Widhalm – U.S. Marine Corps retired Sgt. John “Jack” Thurman poses April 30 in his World War II memorabilia jacket, given to him by his daughter, Karen Thurman. He will give a talk about his military experiences May 7 at the Berthoud Community Center.

The Thurmans also travel the state telling Jack’s story of fighting during the Battle of Iwo Jima and his experiences as one of 17 men photographed in Joseph Rosenthal’s Gung Ho photograph taken Feb. 23 after the raising of one of two American flags on top of Mount Suribachi.

“It was, I would say, the most exciting thing I’ve ever seen, to see that flag waving on the mountain,” said Jack, 92. “We were so proud of that flag when we got it up. We did everything we could to take care of it. That was our flag.”

Jack will describe landing on Red Beach at Iwo Jima, fighting the battle, and raising the flag, at a talk he will give at 10:30 a.m. May 7 at the Berthoud Community Center, 248 Welch Ave. He gives three to 10 talks a month at schools and colleges, police and fire departments, veterans groups and events, and wherever he is invited, all on a volunteer basis.

Jack added, “I’m representing them is what I’m doing. I’m here so I can tell their story.”

Jack, who lives in Longmont at an independent retirement facility, served as an infantryman 1943-1946, fighting in the trenches and covering the flag raisings.

In his talk Jack will tell his personal stories of being among the first marines to land on Iwo Jima and fighting in the Battle of Iwo Jima from Feb. 19 to March 26, 1945. The battle was a major battle in which the Marine Corps captured the island from the Imperial Japanese Army to provide a staging area for attacks that later wasn’t used.

Jack also will talk about climbing Mount Suribachi, a 169-mile-high mountain at the southwest end of the island, and placing the flag at the rim of the volcano. Jack, who was 19 at the time, is on the far left of the photo with his right arm raised, holding his helmet.

“There’s a lot of wind up there,” Jack said. “The flag is so huge, it pushed everyone around.”

Jack recalled how he could see the flag at night when there was artillery fire or an exploding bomb.

After his presentation, Jack will take questions, he said.

“Most people are in awe because he’s history and he’s here, and they are meeting history face to face,” Karen said, adding she also gets a second reaction. “The other is it’s an honor to meet him and hear his stories. I’ve got to tear people away from him. They soak him up. They have question after question. That keeps him going.”

Jack shares his personal experiences in his self-published book, “We Were In The First Waves Of Steel Amtracs Who Landed on Iwo Jima,” which he published in 2009. He also plans to write an autobiography that will include more about his experiences on Iwo Jima.

Jack lived in Boulder from 1961 to 2009, when he moved to Longmont. He has a 40-plus-year career as an architectural detailer and illustrator. His late wife, Carol, is still his sweetheart. They were married for 58 years when she died in 2008. They have four children.