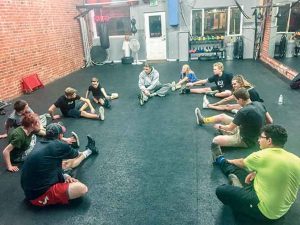 Students in the Journey of Strength and Hope program (J.O.S.H.) stretch during one of the first classes. The program is designed to help young people deal with difficult situations and help others who may need a positive outlet where otherwise there may not be one.
photo courtesy of JJ Francis

Warriors. Conquerors. Defenders. Those are the words JJ Francis used to describe the teens who come together each week through the Journey of Strength and Hope (J.O.S.H.) program.

“We want these kids to feel empowered; like they can overcome any struggle,” he said, his voice cracking with emotion.

Francis’ son Joshua, a Berthoud High School student and talented musician, took his own life in November of last year. He was only 15 years old.

Just days later, Scott Crossen, boxing coach at Berthoud Athletic Club for the past decade, who has worked with teens as a trainer and mentor since the early ‘90s, decided something needed to be done.

“I didn’t know Joshua at that time, but it was the fourth or fifth time that a suicide had been brought to my attention in as many years,” said Crossen. “Every time I hear it, it rips my heart out. I’ve always felt there were alternatives, if only they had known about them.”

Crossen teaches a controlled form of boxing, a sport he said offers participants a positive outlet to channel their anxiety, depression, and whatever else they might be feeling.

“I’ve worked with struggling kids over the years, but not so much suicidal,” he said. “That’s really only become a focus more recently, as parents have begun calling me, concerned about their kids.”

Two days after Joshua took his life, Crossen contacted Kate Hudson, mother of one of the teens he’d trained and mentored in the past, as well as a former police officer with crisis-intervention training.

“Scott called me and said something needs to be done to help the kids in our community,” said Hudson. “We agreed that we needed to get input from kids and that we also needed to talk to Joshua’s parents.”

The Francis family was quickly on board, and even asked Crossen to speak at Joshua’s memorial service, where he detailed the plan to Joshua’s friends and family. Within a week, what would later be referred to as the J.O.S.H. program hit the ground running. Students work on a project at a J.O.S.H. program meeting at Berthoud Athletic Club. The club has seen a good interest from a number of students.
Photo courtesy of JJ Francis

“In the beginning we didn’t even know what the need was yet, but knew we needed to do something,” said Francis. “We had the opportunity to create a positive effect out of a negative thing.”

Before long Francis, Crossen, Hudson, and two other parents had formed a board, three of them certified in youth mental-health first aid. Most of the board members, including Francis, also have prior coaching experience.

“We all like working with kids already, and this gives us a higher purpose,” said Francis.

Hudson’s 14-year-old son Gunnar was asked to be a teen leader and soon came up with the acronym J.O.S.H. for the Journey of Strength and Hope program. The similarity to Joshua’s name was meant to add extra meaning to the name of the program.

It wasn’t much longer before the board members and teen warriors had developed a vision for the program.

“The focus needed to be on kids who are struggling,” said Crossen. “We wanted to show them a positive outlet and a bright future ahead. In many cases kids don’t see that; they feel they have nothing to live for.”

“We needed to impart strength, confidence, and a feeling of being valued and being part of something in these kids,” said Francis. “A lot of the things J.O.S.H. became about are the same things I think would have helped Joshua.”

In the beginning, meetings consisted of a core group of a dozen of Joshua’s closest friends getting together each Wednesday in the boxing room at Berthoud Athletic Club.

Hudson said she clearly remembers preparing for the group’s first meeting, and worrying that no one would show up, but said several kids did arrive and they fumbled their way through that first evening.

“Three kids in particular shuffled past me, individually, with their shoulders slumped, heads down, and no eye contact,” said Hudson. “I was thinking, ‘These are the kids that need this program,’ and I prayed for God to help us reach these kids and be able to provide them with what they need.”

Hudson said she was amazed to see a difference, after just those first two-and-a-half hours.

“Those same three kids walked out with their shoulders back a bit, their heads up, and each of them said goodbye to me while looking me in the eye.” she said. “I knew then that this program was special.”

Before long those Wednesday nights had unofficially been dubbed “fitness nights,” and consisted of boxing training led by Crossen, followed by a brainstorming session during cool down.

With a Wednesday night routine in place, the group took to meeting every other Sunday as well, for what would become creative meetings.

“On Sundays we’ve made huge homemade jigsaw puzzles, we’ve had a giant bubble party, and we’ve even had some of the kids bring guitars in and play,” said Francis. “These meetings are always fun and creative.”

The board members agreed the purpose of J.O.S.H. is for kids to have a place where they feel welcome, and feel like they matter.

“This isn’t a place where we say, ‘Here, come sit on a couch and talk about your problems,’” said Hudson. “We are always here to listen, but this is a place to work through those problems in positive ways, such as working out, drawing and painting.”

The newest developments for the program have been the achievement of non-profit status, and the introduction of Saturday give-back days, which are expected to take place once a month. At their first Saturday get together the J.O.S.H. warriors met to help a family who was affected by both the tornado and a recent fire west of town.

“There’s definitely a core group of kids that come to the meetings, but our doors are open to anyone who needs to feel like they belong,” said Francis. “This isn’t the right fit for everyone, but it is for those kids who may not be in a lot of extracurricular activities and need to feel a sense of purpose.”

Francis said the program is growing, and the board has recently begun purchasing some of its own equipment, such as boxing gloves and jump ropes.

“We haven’t publicized yet, but now we’re ready,” he said. Francis said the board hopes to invite volunteers with specific skill sets and mentors who might be interested in talking to the group, and to invite the local schools to get involved as well.

“I would love to see it grow into a big program, but from the standpoint that it grows so that each kid that needs J.O.S.H. finds us, and benefits from what we have to offer,” said Hudson. “I never want it to get so big that even one kid would feel lost in the crowd. That is what we’re fighting against.”

“We are dedicated to making this work,” said Crossen. “Every single person involved is doing this through personal dedication, as a volunteer, and that’s something that’s important to us.”

The board members’ and team leaders’ long-term dreams for the organization include raising funds for activities and field trips, bringing in community volunteers, and perhaps someday helping nearby communities develop similar programs of their own. But in the meantime, Francis said one goal stands out above all others.

“The measure of success for us would be that there wasn’t one single student who felt that they weren’t a part of something,” Francis said. “Personally I feel like it’s working. I see it working in these kids.”

J.O.S.H. is primarily geared toward teens in seventh through 12th grade, due to the nature of the discussions and team-building activities that take place during meetings. Anyone who would like to attend an upcoming activity can request to join the Facebook group for meeting times and updates by visiting www.facebook.com/groups/JourneyOfStrengthAndHope/.

A public page is also available for those who wish to learn more about the program at www.facebook.com/JourneyOfStrengthAndHope. Donations to support the costs of activities, exercise equipment, t-shirts and wristbands would be greatly appreciated, and can be made at www.youcaring.com/joshjourneyofstrengthandhope-721352. For more information call 970-779-1508 or send an email to [email protected].