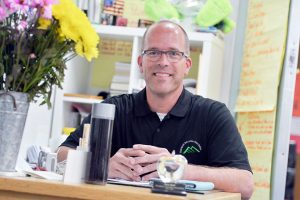 Ivy Stockwell fifth grade teacher Dean Book was selected as a 2015-2016 Crystal Apple Award recipient. Book was one of three selected from 19 nominees to receive the top honor from the Thompson Education Association this year.
John Gardner / The Surveyor

Dean Book is soft-spoken and humble. He doesn’t like being the center of attention. But that’s exactly what the Ivy Stockwell fifth-grade teacher was on Friday, May 6, as he is one of the top three honorees at the 15th annual Crystal Apple Awards recognition at the Chilson Recreation Center in Loveland.

Book is a Greeley resident and commutes to work every day because he loves the community, the school and the students.

“It’s one of those things where I just really enjoy the environment and the community,” he said. “So, it’s worth the drive.”

Book has worked at Ivy Stockwell for 24 years; it’s the only school he’s worked at and it’s the same school he did his student teaching at before being hired.

“They can’t get rid of me,” he joked. And it doesn’t seem like they want to, either.

Talking to Book about what receiving the Crystal Apple award means, Book’s answer was cut short just as a colleague walked past and said, “We love him.”

Book smiled at the comment and continued: “It means that we’re working together and they value what I’m doing and that I’m part of the team.” 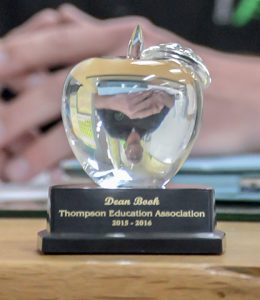 The Thompson Education Association hosts the Crystal Apple Awards annually to recognize outstanding teachers in the district. Each year, teachers are nominated by colleagues for the awards. Nominees are evaluated by the Crystal Apple Committee who selects the top three at each educational level. The top individual in each category is then selected by an out-of-district evaluator to avoid bias.

For Brandvold, who’s been in education for 30 years, the last 12 at Berthoud High, just being nominated is special.

“It is especially meaningful when the people you work with take the time to recognize your efforts,” Brandvold said. “I am very appreciative of the exceptional people I work with at BHS.”

Cline has worked at BHS for 15 years as a guidance counselor and said she was honored with the nomination.

“It is an honor to be nominated by my peers for the Crystal Apple Award,” she said. “I love my career.”

More than 300 teachers, staff, and district employees attended the awards ceremony on May 6. Book said being selected as one of the top three was a positive thing, not only for him, but for the faculty at Ivy Stockwell.