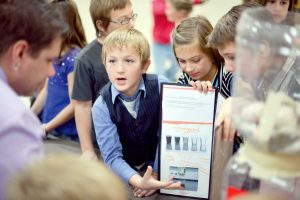 Ivy Stockwell fifth graders presented to teachers, students, parents and others, results of water filters they made themselves with the purpose of reducing turbidity levels in water from Carter Lake, on Nov. 20.

Students’ projects were part of a unit in science class called “mixtures and solutions,” where students studied putting mixtures together and taking them apart, again, according to Ivy Stockwell fifth grade teacher Jason Hooker.

“We focused on putting the mixtures together and getting the solid pollutants out,” Hooker said.

The water-quality science project provided real-world applications because of the 2013 flooding and to educate the students about the world-wide water issues where a majority of the world’s population lacks quality drinking water, according to Hooker.

Students were given a sample of raw water from Carter Lake and then added more particles to it to make the water even more contaminated. They were then charged with reducing the turbidity level in the water which started out at 79.5 (NTUs), according to Hooker. Turbidity refers to water’s clarity or cloudiness due to pollutants. The lower level of pollutants reduces the water’s turbidity levels; lower turbidity levels translate to higher-quality water for consumption. Their goal was to lower that number using a filter they designed and incorporating all sorts of different media as a filter; sand, gravel, sponges, coffee filters, screens, and even panty hose in some cases.

“The project was to learn how to filter water and lower the turbidity so that we can consume it,” said fifth grader Grayson Heyart.

The students worked on the project for a couple of weeks and managed to get the turbidity down pretty low in some cases.

Their goal was to reduce the water from 79.5 NTUs, which was a pretty difficult task.

Grayson’ group reduced the turbidity to 51.5 NTUs from the 79.5 starting level. The group built its filter out of a cheeseball and an animal-cracker container as the filter’s body. They used golf-ball sized rocks, coffee filters and cloth to clean the water.

“I feel like we could have done better if we had more time,” Grayson’s teammate Miranda Roth said. 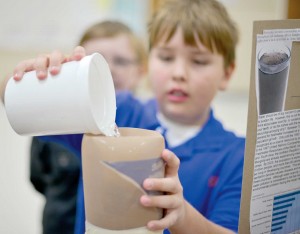 Ethan Graham demonstrates his group’s water filtration system by pouring water into the filter on Nov. 20 at Ivy Stockwell. Ethan’s group included Alex Premer, Ashton Scaggs, Jesse Young, Gage Dower and Jered York; who were able to reduce the amount of turbidity in the water from 79.5 NTUs to 3.97. That reduction was the second best out of all the groups.
John Gardner / The Surveyor

One group of fifth graders; including Alex Premer, Ashton Scaggs, Jesse Young, Gage Dower, Ethan Graham and Jered York, was able to reduce the turbidity level to as low as 3.97 from 79.5, according to York.

“They did a really great job,” Hooker said.

Understanding how to filter water was only one aspect of the project and that wasn’t always the best part of it either.

“It was all about the engineering and design process of building a filter,” said Garrett Purman, whose favorite aspect of the project was actually building the filter.

Students researched different water issues around the world, as well as local water issues, to understand the importance of clean water. There were also a number of expert guest speakers who spoke to the students too, such as Brian Werner, with the Northern Water Conservancy District, and the Town of Berthoud’s water and wastewater operations manager, James Taylor, among others.

“There were a lot of real-world applications so that the kids could see why filtering water is so important,” Hooker said.

The Nov. 20 presentations were a culmination of the students’ hard work, he said.

“Some of [the filters] worked wonderfully and others didn’t,” Hooker said.

Another aspect of the project was the engineering and design process and how failure is part of the scientific process.

“We take a failure and we reimagine and we redesign what we’ve done and we retest and see if we can improve,” Hooker said.

Students repeatedly said what was working with other classmates was their favorite part of the project, but they also picked up on the educational value of clean water.

“We learned that filtering water is very simple and that it takes teamwork,” said Will Daigneault.