A crowd of students, faculty and volunteers gathered behind Ivy Stockwell Elementary on Wednesday, Oct. 18, to witness the dedication of the school’s new outdoor classroom. 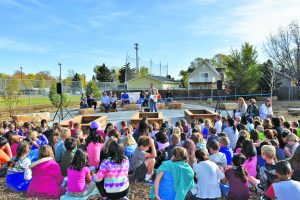 Superintendent Stan Scheer joined students in a celebratory freeze dance following a ceremonial ribbon cutting and speech by Principal Rick Bowles, thanking the many volunteers who donated time and resources throughout the process.

“We have an amazing team of volunteers who are out there all the time painting and pitching in to make this happen,” said Bowles in an earlier interview. “My role has simply been to support them however I can.”

The outdoor classroom has been in the works for five years, ever since the school’s Parent Teacher Organization (PTO) decided the school should allocate funds from its annual Jogathon fundraiser toward a long-term goal.

“We had some money and wanted to do something substantial with it, not just let it get used up in day-to-day maintenance,” said Ivy parent Jill Strait, who’s been a key member on the outdoor classroom committee since its inception. “We wanted to be able to say, ‘Our Jogathon helped build this.’”

Bowles, Strait and other PTO members began brainstorming ideas for those funds, knowing they wanted to use them to get students outdoors, but unsure of the best way to make that dream a reality.

Then, three years ago the team pulled in three more members: Melissa Sattler, Dorothy Fuller and Bob Barkeen. Fuller, a faculty assistant at the school, worked with students and staff to form a vision of what they’d like to see in an outdoor space. Barkeen proved to be invaluable in drawing up plans to align with that vision, which were then sent out to the school community, the district for approva,l and subcontractors for estimates.

“Going through the process of creating the plans, getting all the approvals and getting it started were the biggest hurdles,” said Strait. “We also spent a lot of time meeting with staff to see how they could incorporate the idea with their curriculums, and broke down what they needed by grade level.”

After years of planning, the team settled on a three-phase vision. Phase one would be the outdoor classroom, phase two would be a revamp of the playground area, and phase three would include updating the sports fields and possibly adding a track.

“We tried to be strategic about how to make this work long0term,” said Strait. “We’ve worked on grants and donations, but (Bowles) pulling the trigger and allocating funds from Jogathon really helped get it started.”

With such a lofty vision in mind, the team decided to direct their focus solely on the integral aspects of phase one for the dedication, merging the recently added school garden with the team’s ideas for the outdoor classroom.

“Our first big push was to get the area to a point where classes could start utilizing it right away,” said Strait. “If teachers have something the class is learning about or wanting to do outside they can sign up for a block of time to go out and use that space. Some teachers want to use it for silent reading time to get the kids outside instead of being inside all day long.”

“Not all kids are traditional learners who can spend all day behind four walls,” she said. “Getting them outside, getting them some fresh air and some sunshine changes their perspective.”

With the outdoor classroom open for business, the team is moving on to planning and fundraising for the next steps – a music station, a shade cover for the seating area, irrigation and a light sensory wall, all of which they hope to have in place within the next year.

While several more concepts remain in the works, Strait said those will depend on volunteers, funding,and new committee members to step in and take the lead on the project as the founding members’ children move on to middle school over the next couple of years.

Proceeds from the FACE concert which Ivy recently hosted will help fund the next steps in phase one, but Barkeen said the final phases will require additional financial boosts, and possibly grants to bring to life. Fortunately, the group said they’ve seen an increase in support in recent weeks.

“It was hard for parents and different organizations to visualize what we were trying to do in the early stages,” said Strait. “Now that they can see what we’ve done and that we’ve followed through, they’re excited to support us.”

As students begin to immerse themselves in their new outdoor learning environment over the coming weeks, Barkeen hopes this inaugural group will care for and appreciate the space they helped create, and in doing so, set an example of respect for nature and the outdoors for generations to come.

“With the outdoor classroom, kids won’t have to go on a field trip to connect with and understand the landscape that we’re all a part of,” he said. “Now they have an environment for that to take place in, right here at school.”