Positivity is key for Ivy Stockwell Principal Rick Bowles. That’s why the “blue slip” incentive, started some time before Bowles joined the staff at Ivy a decade ago, remains one of his favorites to this day. 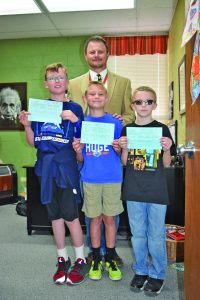 Blue slips, the name given to positive office referrals, can be handed out to students by any staff member for a number of reasons, including improvement in academics or behavior; acts of integrity, compassion or helpfulness; and virtually any other positive act.

After receiving a blue slip, students are allowed to leave class and walk to the office, where they are ushered into Bowles’ office to chat with the principal and receive a prize. If he’s unavailable, he picks the student up from class at his first opportunity.

First grader Isaac Gibb said he remembers picking out a special prize in Mr. Bowles office and taking the blue slip home to hang on the refrigerator when he received his first slip in kindergarten for focusing on his work.

Gibb’s classmate Lauren Vogt, an aspiring writer, has received two blue slips for excellence in writing. She said not only do the slips make her feel proud, but they make her parents proud as well.

“My dad freaks out when I bring home a blue slip and says, ‘Whoa! Another one?’”

Gibb said his mom had a similar reaction when he brought his award home. “She said, ‘Wow, what’s that? I never got one of those in school!’”

Makenna Witting, a fifth grader at Ivy, has received her share of blue slips over her years at Ivy.

“I’ve probably gotten about 20 since I’ve been going to school here, and two or three this year,” she said. “I do Lexia on the computer and I got a blue slip when I finished a level, and another one when I fixed a sign that had blown over outside.”

Witting said she’s occasionally rewarded with ice cream when she comes home with one of the positive slips, and that receiving one inspires her to work for more.

For Bowles, the best part of the incentive is the many opportunities for positive enforcement it affords: praise from the awarding staff member, the front office staff, Bowles, and the student’s parents, whom he began calling to inform that their child had been caught demonstrating positive behavior during his early years as principal.

“The positive blue slips are great for me because they give me many more reasons to call home than the negative incidents do,” he said. “Parents are always a little worried when they first get the phone call, and then they become relieved throughout the year as they begin to see that they get more phone calls home for positive than negative things.”

Last year at Ivy, over 750 blue slips were handed out, in comparison with only 155 pink discipline referral slips. That meant over 750 opportunities for Bowles to have positive interaction with his students.

“I get to talk to them each time they come in with a blue slip, and it’s not just about academics, it’s about what sports they’re in to or what their plans are for the weekend,” he said. “It’s a chance to build a relationship with them.”

With the blue slip incentive’s close alignment to the school’s STAR (Safety, Teamwork, Achievement, Respect) behavior program, Bowles said it’s unlikely to go away as long as he’s at the helm.

“We’re always looking at ways to recognize the positive things students do,” he said. “This method gives us a lot of bang for our buck.”